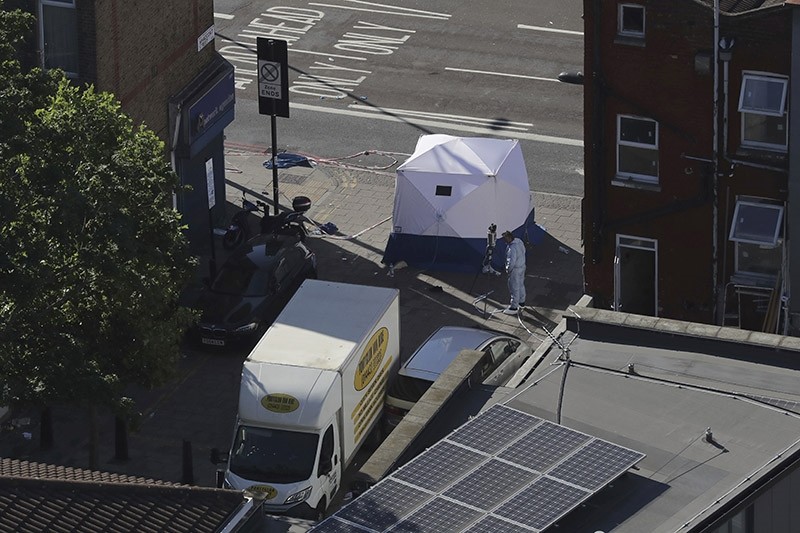 A forensic officer stands at the scene with a van near Finsbury Park station after the vehicle struck pedestrians in north London, Monday June 19, 2017 (AP Photo)
by Compiled from Wire Services Jun 19, 2017 12:00 am

The man suspected of plowing a van into Muslims taking a break from late-night prayers in London has now been arrested on terror grounds, police said Monday.

The 47-year-old man was arrested for attempted murder after the incident in Finsbury Park early Monday. One man was pronounced dead at the scene.

The Metropolitan Police said in a statement that the man was detained by members of the public at the scene of the attack early Monday.

Authorities say a residential area in Cardiff, Wales, is also being searched.

"He has further been arrested for the commission, preparation or instigation of terrorism including murder and attempted murder," Scotland Yard police headquarters said in a statement.

Deputy Assistant Commissioner Neil Basu also said that it is being "treated as a terrorist incident and investigated by the Counter Terrorism Command."

Worshippers leaving a London mosque just after midnight on Monday were helping an unwell elderly man when a van deliberately targeted them, eyewitnesses said, driven by an attacker who shouted: "I want to kill all Muslims."

The van swerved toward the people outside the Finsbury Park Mosque in north London just as they began to assist the man, who had collapsed.

"He turned left into the alleyway, and he just drove at people," eyewitness Abdiqadir Warra told Agence France-Presse (AFP).

"Some of them he took a few meters. A man was inside in the van, I saw with my eye, and the old man was also on the ground, and I see some people were also injured. Some of them were very bad."

Locals then pounced on the driver and pinned him down while waiting for the police to arrive.

"The man, he tried to escape... but they caught the driver," Warra said.

One man was trapped under the van and people tried to lift up the vehicle to free him.

Amin said that when people seized the driver, "he was shouting: 'All Muslims, I want to kill all Muslims.' Literally, he said that. Word by word."

Police said that one man had been arrested at the scene and that no further suspects had been identified.

Another eyewitness, who gave his name as Athman, told AFP: "People were screaming: 'It's a terrorist attack, it's an attack, this guy attacked us', and I had to run back and tried to save people who were still alive and giving water, helping the police.

"While he was in the police van he was waving for victory, he was very happy.

The incident came after two terror attacks in London in the past three months involving vehicles ploughing into crowds of people, as well as the suicide bombing attack at a Manchester pop concert in May.

"People now have a big question about safety in London after all these terrorist attacks, and we want to assure them that they are safe, and that's why we want to work with the police," Kozbar said.

"People feel unsafe because after the terrorist attacks of London, Manchester, the increase of Islamophobia and hate crimes," he added. "This is very worrying to the Muslim community."

Several bunches of flowers had been deposited outside the mosque as commuters went to work Monday morning.