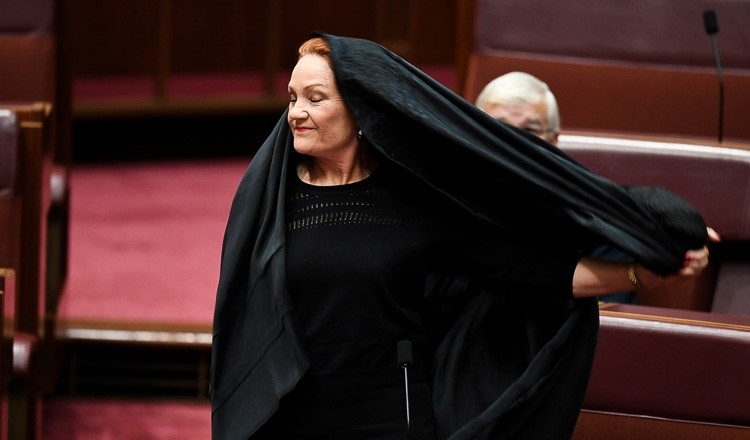 Australian anti-immigration politician Pauline Hanson caused a furore when she entered the Senate wearing a full burka. (AFP Photo)
by Compiled from Wire Services Sep 14, 2017 12:00 am

An Australian senator who a month ago provoked an angry backlash by wearing a burqa in Parliament urged lawmakers on Thursday to ban full-face Islamic coverings in public places.

Pauline Hanson, leader of the anti-Muslim, anti-immigration One Nation minor party, was arguing for proposed laws that she introduced into the Senate that would make wearing full-face coverings an offense punishable by a 4,200 Australian dollar ($3,400) fine. Compelling others to wear such coverings would carry a prison sentence of up to six months and an AU$42,000 fine. She proposes several exempt circumstances including entertainment and sport.

"Are we that pathetic as a nation that we are giving up our values and who we truly are because we're worried about hurting someone's feelings?" Hanson told parliament.

Hanson said the burqa had been banned in many countries, including Muslim countries. She argued that if Australians vote on same-sex marriage, "then I suggest having a plebiscite and let the people have a say on whether they want full-face coverings in this country."

"We have fought for women's rights in this country... yet you're not prepared to stand up and fight for the rights of these women who are probably made to wear these garments," she said.

Three senators including Hanson argued over her bill before a majority of senators shut down debate until a later date.

Hanson, an outspoken fan of President Donald Trump, sat in the Senate last month wearing black head-to-ankle garments for more than 10 minutes before removing the veil.

Her actions were widely condemned by senators as insulting to Muslims, although it sparked public debate for and against her actions across Australia for days later.

"My reasoning to wear the burqa into this chamber was seen as a stunt, call it what you want, I really don't care," Hanson told the Senate on Thursday.

"Because the whole fact is that it's got Australians talking and Australians feel now they have a voice and it's created debate," she added.

But government's junior coalition partner, the Nationals party, on Sunday narrowly rejected an attempt to make such a ban party policy.

Deputy Prime Minister Barnaby Joyce, the Nationals' leader, had argued at the conference against such a ban, saying it could damage Australia's trade relations with Muslim-majority countries including Saudi Arabia and Indonesia.

Hanson on Thursday said the Nationals were "clearly very divided on this."

Sam Dastyari, an opposition senator and an Iranian-born Muslim, told the Senate the burqa argument was "a ridiculous debate."

Hanson, whose party holds four seats in the senate, is known for her anti-Muslim, anti-immigration rants. Last year, she said Australia was being "swamped by Muslims."

Some of her earlier proposals include banning the construction of new mosques and Islamic schools as well as installing CCTV in mosques and schools.

The French Parliament passed an act more than six years ago that made France the first European Union country to ban the niqab and burqa, the full-face or face-and-body coverings worn by some Muslim women, in public places. Others have since followed.

According to census data, about 2.2 per cent of Australia's 24 million people are Muslim.