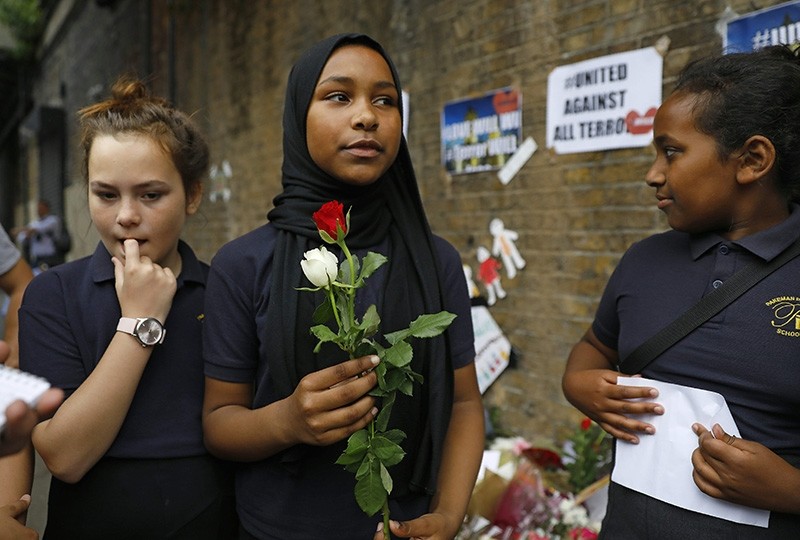 Muslim youth like this girl from north London's Pakeman Primary School may face questioning about their choice to wear a headscarf, following a newly-announced U.K. recommendation. (AFP Photo)
by Daily Sabah with AA Nov 20, 2017 12:00 am

Britain's primary school inspectors will question girls who wear the Muslim headscarf at school, the head of the Office for Standards in Education (Ofsted) announced over the weekend.

Amanda Spielman explained the move was to tackle situations in which wearing a headscarf "could be interpreted as sexualization" of school children.

Spielman's announcement, which came as a recommendation not yet added to the inspectors' official handbook, advises schools to record pupils' responses to questions as to why they wear the hijab to school.

"While respecting parents' choice to bring up their children according to their cultural norms, creating an environment where primary school children are expected to wear the hijab [headscarf] could be interpreted as sexualization of young girls," Spielman said.

"In seeking to address these concerns, and in line with our current practice in terms of assessing whether the school promotes equality for their children, inspectors will talk to girls who wear such garments to ascertain why they do so in the school," she added.

Last week Spielman met with anti-headscarf campaigners, after a survey by British daily Sunday Times suggested that nearly a fifth of 800 state primary schools in 11 regions of England list the garment as part of their uniform policy, mostly as an optional item.

The Muslim Council of Britain Secretary-General Harun Khan quickly responded to the move.

"It is deeply worrying that Ofsted has announced it will be specifically targeting and quizzing young Muslim girls who choose to wear the headscarf," he said.

"It sends a clear message to all British women who adopt this that they are second-class citizens that while they are free to wear the headscarf, the establishment would prefer that they do not," Khan said.

"It is disappointing that this is becoming policy without even engaging with a diverse set of mainstream Muslim voices on the topic," he added.

In reference to the 2014 "Trojan horse" affair that provoked fear of extremist influence in U.K. schools, Khan urged "any parent or member of the public who has a concern about fundamentalist groups influencing school policy, or breaching equality law to make a complaint to the school."

"If schools do not act on these complaints, they can be made to Ofsted directly," he said.

Since 2014, Ofsted and the Department for Education have mandated schools teach and adhere to core British values. Attempts to enforce this policy have led to turmoil over restrictive measures and undue questioning of students at Islamic faith schools.

The 2014 Birmingham Trojan horse scare occurred after a photocopy of a fake letter describing terrorists' plans to take over a school was leaked to the media. While the letter was quickly discredited, the idea took root, stirring panic that such a situation might occur in the future.