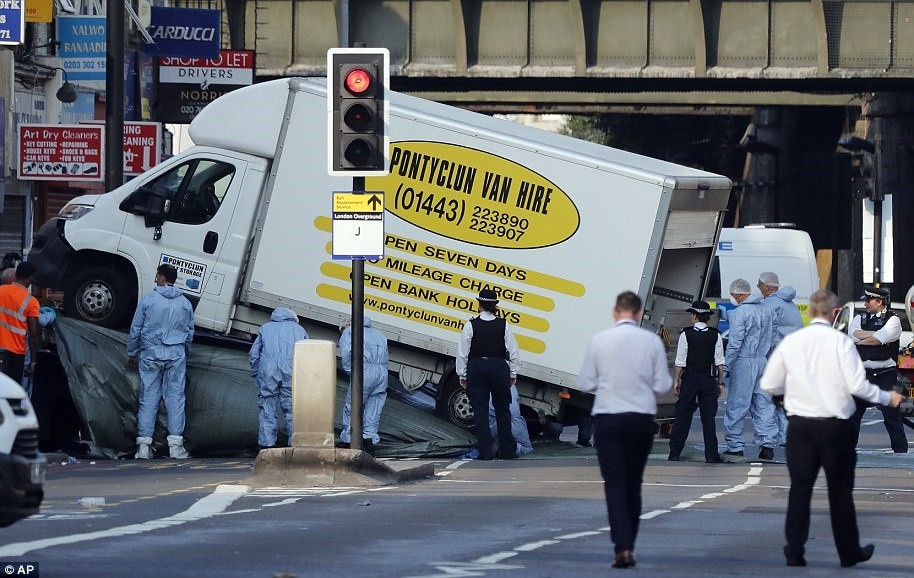 In this file photo dated Monday, June 19, 2017, forensic officers move the van which struck pedestrians near a Mosque at Finsbury Park in north London. (AP Photo)
by Associated Press Feb 02, 2018 12:00 am

A man who drove into worshippers near a London mosque, killing one man and injuring a dozen others, was sentenced Friday to at least 43 years in prison for what a judge called a crime driven by "malevolent hatred."

Judge Bobbie Cheema-Grubb said Darren Osborne's mind had been "poisoned" by far-right ideas, and he had shown no signs of remorse.

"Your mindset became one of malevolent hatred," the judge told the prisoner in the dock at Woolwich Crown Court. "This was a terrorist attack. You intended to kill."

She sentenced 48-year-old Osborne on Friday to life with no chance of parole for 43 years.

A jury convicted Osborne on Thursday of murder and attempted murder for the June 2017 attack in London's Finsbury Park neighborhood.

A 51-year-old man, Makram Ali, was killed and 12 people were injured when Osborne drove a rented van into people leaving evening prayers during Ramadan.

Prosecutors said Osborne was motivated by a hatred of Muslims and had been radicalized by online far-right and Islamophobic propaganda.

Ali's family watched from the public gallery as sentence was handed down.

The judge said the victim had "lived his life without enemies — until, unknowingly, he met you."

Ali left a wife and six children. His daughter Ruzina Akhtar said in statement read in court that "his life was taken in a cruel way by a very narrow-minded, heartless being."