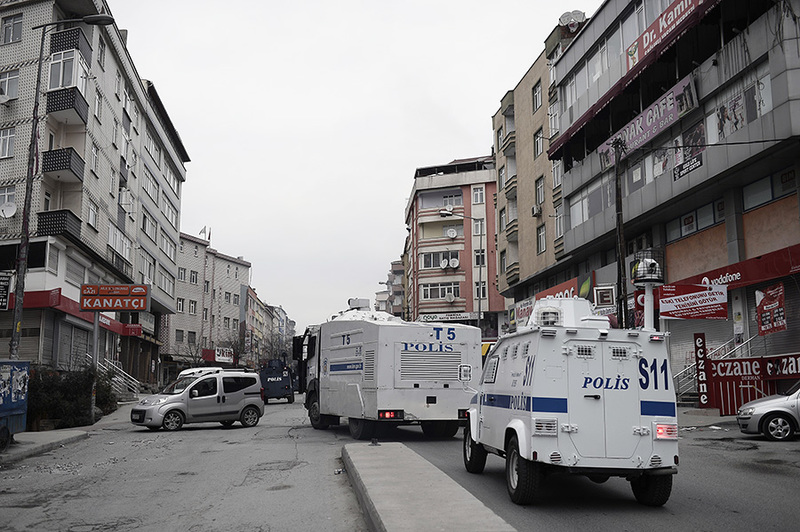 Flanked by officers from the Special Operations Unit, riot police and helicopters, the Turkish National Police's anti-terror units descended on Gazi, a neighborhood in the city's working-class district of Sultangazi.

In the early hours of Tuesday, police officers in armored carriers simultaneously raided locations, including houses and shops that have been under surveillance for terror activities.

Several DHKP-C supporters confronted the police squads, setting up barricades on some streets and hurling stones and fireworks. Police dispersed the crowd by firing tear gas and water cannons. There was a heavy police presence in the area throughout the day against further riots by the terrorist organization's supporters.

Along with suspects, police nabbed two unlicensed pistols, two shotguns and a large cache of munitions from raided sites.
The DHKP-C, which advocates a far-left ideology, draws considerable support from Istanbul's Okmeydanı and Sultangazi districts where members of the organization were spotted wielding guns during last year's riots in the wake of a Gezi Park protester's death.

The DHKP-C was founded in the 1990s after it splintered from a larger group of far-left organizations responsible for a string of attacks, and has kept a relatively low profile. Its attacks are relatively minor compared to the PKK, another terrorist organization active in Turkey; however, it has stepped up its attacks over the past two years. In 2013, a militant carried out a suicide bombing at the U.S. Embassy compound in the capital. The group also claimed responsibility for non-lethal rocket attacks targeting Justice and Development Party headquarters, Turkish National Police headquarters and a Justice Ministry building in Ankara in 2013. The group is designated as a terrorist organization by Turkey, the United States and the European Union.
Last Update: Mar 24, 2015 4:44 pm
RELATED TOPICS