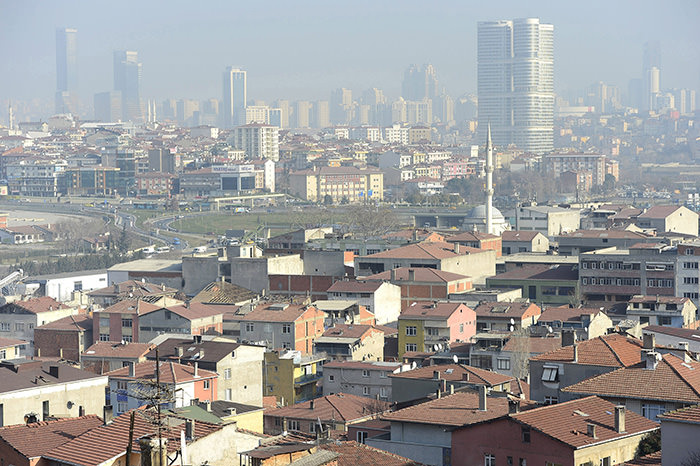 |Photo: AA
by Hazal Ateş Mar 30, 2015 12:00 am
The government has added more housing units to its plans for urban transformation in Istanbul this year, seeking to demolish the crumbling buildings in the city's upscale districts to make way for buildings resistant to earthquakes.

The Environment and Urban Planning Ministry updated its map of areas under the risk of collapse in Istanbul. In 2015, 200,000 housing or business units are set for demolition in 170 districts, 20 more than risky areas defined previously.

Risky areas include parts of upscale Beşiktaş and Etiler as well as the city's largest district Bağcılar on the European side, Üsküdar and Kadıköy on the Asian side. Occupants of the buildings set for demolition as part of the urban transformation project will also see a boost in state subsidies for rents as they will be forced to relocate after the demolition until the rebuilding is completed.

Last year, 12,000 buildings were demolished out of about 130,000. Istanbul's risky areas in total house some 1 million people.

Updated maps show the majority of areas under risk are located on the city's European side. The European side was the scene of mass migration starting from the second quarter of the 20th century and makeshift buildings called "gecekondu" in haphazardly zoned areas are viewed as under risk in particular in the event of an earthquake or a similar disaster. The relocation of those in areas under risk will create new and much safer settlements in the city called "reserve areas," according to authorities.

Risky buildings are determined on the request of their owners primarily but if a building is in imminent danger of collapsing or heavy damage, municipalities can conduct a risk assessment.

Urban transformation was first introduced in Turkey in 2012 as an initiative to renew lower-income areas, reinvigorate shantytown settlements and construct earthquake-proof buildings.

Istanbul, a city home to over 14 million people, sits on active fault lines and experts believe a major earthquake may hit the city in the coming decades.
Last Update: Mar 31, 2015 10:40 am
RELATED TOPICS