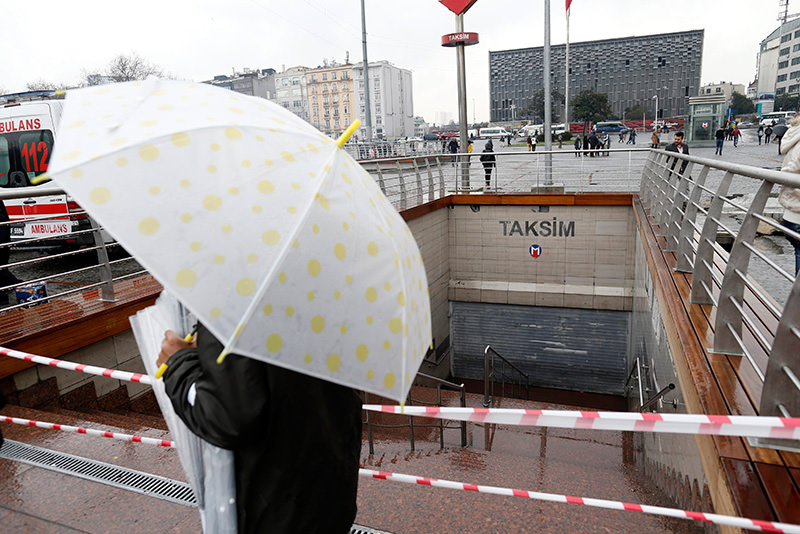 A street vendor sells umbrella in front of a closed subway station after a major power cut, at Taksim Square in Istanbul. | EPA Photo
by Daily Sabah Mar 31, 2015 12:00 am
Daily life ground to a halt in Turkey as power outages have been reported in dozens of cities throughout Turkey on Tuesday due to a fault on power transmission lines, according to Turkey's Electricity Transmission Company TEİAŞ 's statement.

Power cuts in 29 cities began at around 10:30 a.m. and continued for hours before the power was gradually restored.

"We're considering all probabilities behind nationwide power outage, including terrorism" Prime Minister Ahmet Davutoğlu said, adding that a crisis-desk at Ministry of Energy have been established.

Minister of Energy and Natural Resources Taner Yıldız told reporters there may be multiple causes and they were still investigating. He ruled out speculation that it was due to the inefficiency of the power grid. "It happened at a time of low demand and high supply, so inefficiency of power is out of the question. We believe it is something to do with a failure in transmission lines," he said. On a question whether a cyberattack might have caused the outage, Yıldız said they would look into claims. The minister said such an outage was rare. The latest major blackout was in 1999 that left several cities in the country's Marmara region in the west without power after a huge earthquake.

Istanbul's metro, tram and Marmaray services have come to a halt due to a power cut on Tuesday morning. Istanbul Metropolitan Municipality announced on Twitter that metro and tram services, along with Marmaray, had stopped due to the power outage. All passengers were successfully evacuated from metro lines.

Istanbul's Marmaray subway and metro services have resumed later on in the day, at around 13.00. Energy Minister Taner Yıldız stated at around 15.30 local time that Istanbul's 80 percent got its energy back. Power is being resupplied to all Thrace, Black Sea and Eastern Anatolia regions, but there are still problems in Izmir and Ankara, he further stated. Also, Ankara metro resumed normal services.

A nationwide power outage has been reported, including the major cities of Ankara, İzmir, Antalya and Adana. There have been reports of power outages in various malls, too.

The unprecedented power outage left many frustrated. Lengthy traffic snarls were reported in big cities as traffic lights stopped working. Power was restored in 10 cities as of press time including Istanbul and Ankara. Only Van in the eastern Turkey was spared from a massive outage, according to reports, as the city imports electricity from neighboring Iran.

The high-speed train between Eskişehir and Istanbul also stopped working due to the outage, however, the operations have been resumed around 6:00 pm as the power was restored gradually.

Passengers were evacuated and transferred to buses supplied by local authorities.

People flocked to gas stations to buy fuel for electricity generators as they were caught off-guard to sudden cuts.

Power outages also hit some small factories not using backup power and production came to a halt for hours.

Amsterdam, the capital of the Netherlands, also ground to a halt on March 27, with rail and tram transport severely disrupted, stranding thousands of commuters.