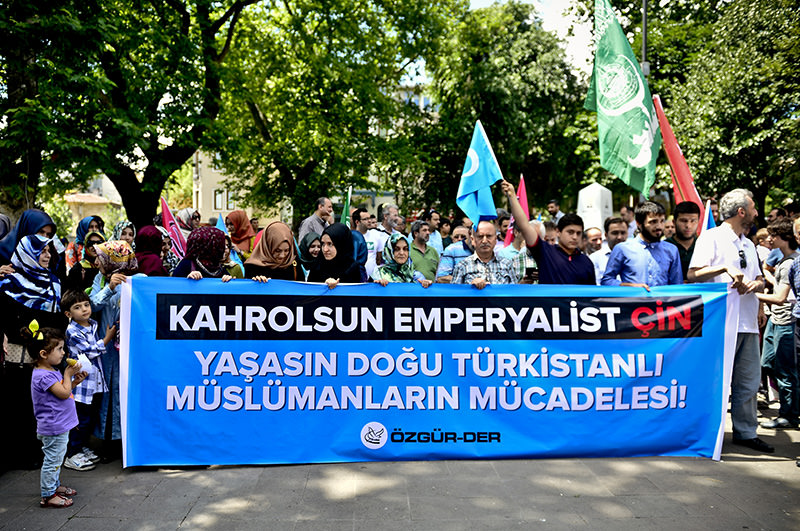 Protesters carrying banner which says: Down with Imperialist China, Long live the struggle of East Turkistan Muslims (AA Photo)
by Daily Sabah with AP Jul 04, 2015 12:00 am
Hundreds of people have marched in Istanbul to protest against China's persecution of its minority Muslim Uighur community.

The group, which has cultural ties to Turkey, has complained of cultural and religious suppression under Chinese rule.

The protesters on Saturday carried flags representing the Uighurs' homeland and called for a boycott of Chinese goods.

Amid mounting anger against China, the Turkish Foreign Ministry issued a statement on Tuesday that said reports about the ban of fasting and observing other religious duties on Uighurs in Xinjiang "caused sadness among the Turkish people." The ministry said "deep concerns" about the reports were conveyed to the Chinese ambassador in Ankara, underlining that Turkey respected China's "territorial integrity." In response to the ministry's statement, Hua Chunying, the Chinese Ministry of Foreign Affairs spokeswoman, said on Wednesday that all ethnic groups in China had freedom of religious belief.

The Uighur diaspora accuses China of a continuous campaign to restrain the religious and cultural activities of the Uighur community, which makes up almost half of the population in Xinjiang. Seyit Tümtürk, vice president of World Uyghur Congress, told Anadolu Agency earlier this week that China has been carrying out a systematic assimilation policy for decades and prevented Uighurs from practicing their faith and culture.