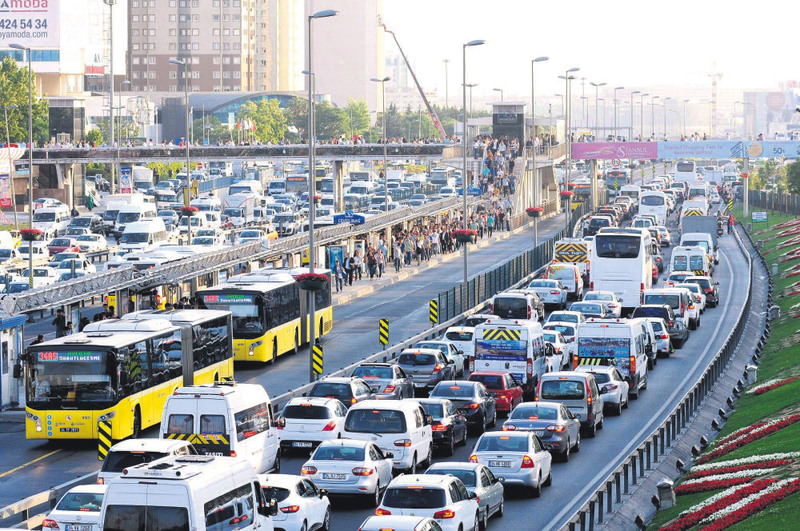 Expansion of metro lines aims to relieve Istanbul of its notorious traffic where a short distance normally taking up 20 minutes can drag up to two hours at times.
by Daily Sabah Jul 05, 2015 12:00 am

Mecidiyeköy, a busy commercial district in the heart of Istanbul, will get a new metro station at the expense of commuters, who will be subject to traffic snarls for 60 days.

Authorities announced that the construction of the new metro station will start today and parts of Büyükdere Street, one of the areas with the busiest traffic in Istanbul, will be partially closed for vehicular and pedestrian traffic. The closed part includes an intersection and Cevahir, a hugely popular shopping mall in the district that hosts hundreds daily.

The construction in the area, already crowded with several construction sites, is expected to be completed within two months, according to authorities.

Mecidiyeköy is one of the busiest locations on Istanbul's European side and host to everlasting clogged traffic. The new metro station aims to ease the heavy traffic a little by providing commuters an alternative way to reach the district. When completed, the station will be the gateway to the Mecidiyeköy-Mahmutbey line that will be able to carry 70,000 passengers per hour between the district and Mahmutbey, an area at the intersection of two major highways straddling Istanbul.

Through its extensions, the new line will also connect central Beşiktaş and the remote Bahçeşehir districts on the east-west axis, providing an incomparably fast alternative between these districts. The duration of the trip between Mecidiyeköy and Beşiktaş will take about five minutes, which currently takes between 15 minutes to an hour - for a 4 kilometer ride - depending on the traffic. The trip between Mecidiyeköy-Mahmutbey will take 26 minutes, a 20-kilometer ride that can take hours during rush hours.

Yet, it is little consolation for motorists and commuters at the moment as they will have to brave the lengthy snarls in the rush hours, especially in Ramadan. The Muslim holy month of Ramadan sees the faithful rush home in the evening hours to break the fast and thus, adds to already worsened traffic.

Traffic is a major downside for an otherwise pleasant journey to Istanbul that attracts millions of tourists and migrants every year with its unique location between two continents and countless attractions.

Authorities have been continuing to look for a solution, or rather a series of solutions, to curb the traffic for years, with little success. The city's current municipality administration is determined to pursue further efforts to that extent, ranging from designated lanes for cars carrying more than one passenger, setting up alternative routes to ease traffic and construction of more parking garages in the city of 14.3 million people.

Ranked highest among the cities with the worst traffic according to TomTom Traffic Index, Istanbul's trouble with traffic snarls is largely attributed to haphazard development and ever-growing population as it is a popular hub for local and foreign migrants, among other factors.
Last Update: Jul 05, 2015 7:37 pm
RELATED TOPICS