Vintage busses of Istanbul hit the road during Qurban Bayram 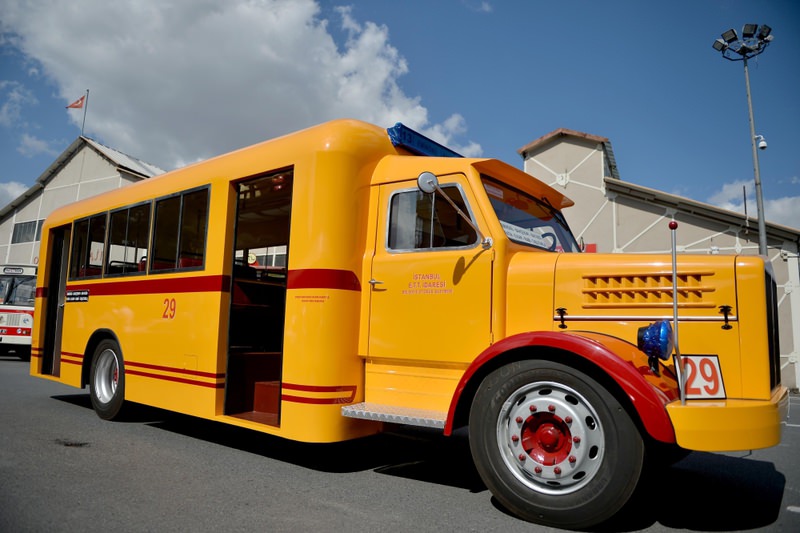 by Daily Sabah Sep 22, 2015 12:00 am
It is announced that Scania Vabis, which was used as a public transportation in Istanbul during the World War II, has been re-manufactured according to its original by the İstanbul Electricity Tram and Tunnel (İETT) and will offer its services to Istanbulites during Eid al-Adha. The nostalgic bus also has a music system in order for passengers to listen to the music of the 1940s.

Head of the Vehicle Maintenance Department of the İstanbul Electricity Tram and Tunnel (İETT) Aydın Karadağ offered insights about the nostalgic vehicle to an Anadolu Agency (AA) reporter at the garage in Topkapı. He said when the Renault-Scemia busses which were purchased by İETT in 1927 were removed from the İETT's fleet in 1942, Istanbul had no busses for public transportation for a while. During this time, the public transportation was undertaken by the electric trams dating back 1913.

Realizing that urban transportation could not continue depending on the railway systems, İETT began working to establish an alternative fleet of busses with a number of modern vehicles. Unfortunately, it was very hard to purchase vehicles due to the ongoing world war and understanding that there was no way of buying busses İETT officials decided to purchase 15 Scania Vabis trucks from Sweden in 1942.

The first bus which was manufactured on the chassis of the original Scania Vabis truck aroused Istanbulites' curiosity and the bus stops in Taksim and Beşiktaş were filled with people just to be able to see the new buses. Although the bus looked like a truck from the front, it has a passenger space with two doors and three windows.

By 1944, the number of Scania Vabis busses reached 15 and these vehicles offered their services for six years. The trucks which were converted into busses were put out of service in 1948-49 following the purchase of more comfortable models from Sweden in 1947-48.

The good news is that Istanbulites will be able to enjoy nostalgic Scania Vabis busses as the Istanbul Metropolitan Municipality Council agreed to a 50 percent discount on Istanbul's public transportation fees during Qurban Bayram. According to the agreement, the discount will apply to all public transportation in Istanbul, including İETT buses, the metrobus, metro, tram, funiculars, public and private ferries and public buses.

Moreover, the council announced that public transportation in Istanbul will be free of charge on Sept. 28, the day the new school year will start, from 6:00 a.m. to 2:00 p.m.