Terrorists set car on fire in Istanbul while woman, her little son inside 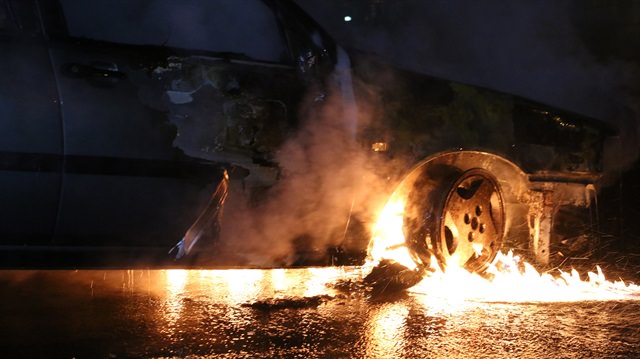 by daily sabah Jan 01, 2016 12:00 am
A Turkish woman and her little son were rescued on Friday at the last minute from a burning vehicle after a group of terrorists set five cars on fire in Istanbul's Okmeydanı district.

According to witnesses, a group of unidentified attackers poured gasoline on five cars parked in Fatih Sultan Mehmet street in the Okmeydanı district, however locals immediately extinguished the fire after seeing the flames.

Hilal Şimşek and her little son, who were trapped inside their car when the terrorists set the cars on fire, were rescued by locals.

Şimşek said she was inside the carwaiting for her husband when the attackers approached and poured gasoline on it. Her husband took the two out of the car, while locals were putting the fire out.