Time of recovery and manhunt after Daesh attack in Istanbul 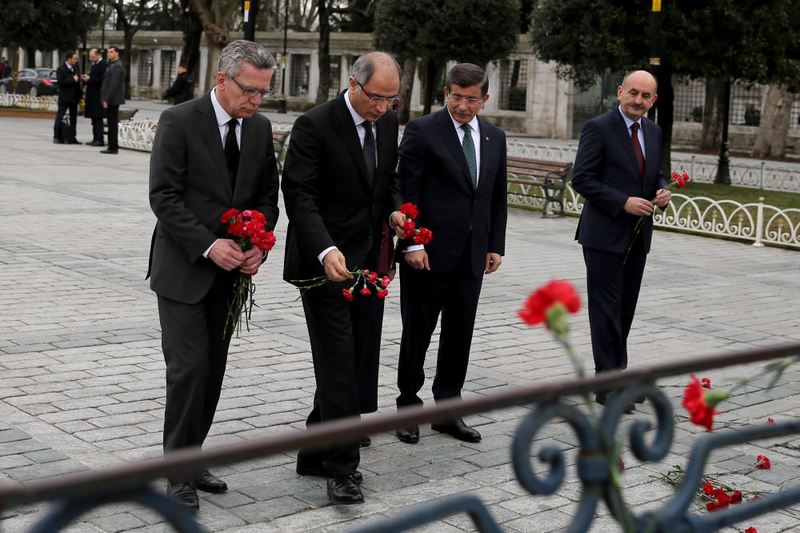 Turkey is recovering from a terror attack by Daesh in Istanbul on Tuesday, which killed 10 German tourists. A manhunt for those connected to the attack is underway while Turkish and German officials visiting the scene on Wednesday said the attack only pushed the two countries to further cooperate in the fight against terrorism

One day after a Daesh suicide bomber blew himself up in the heart of Istanbul, Turkey reels from the devastating attack that killed 10 German tourists and injured 16 others. As the workers cleaned the blood stains near an ancient obelisk in Istanbul's Sultanahmet Square yesterday, the site where the group of tourists was killed, authorities turned the focus on the possible accomplices of Nabil Fadli, a Syrian citizen of Saudi origin identified as the suicide bomber. A total of 68 suspects were detained in two days across the country while German and Turkish officials vowed to keep their counterterror cooperation strong. German Interior Minister Thomas De Maiziere flew to Turkey yesterday and accompanied Prime Minister Ahmet Davutoğlu in a visit to the injured German citizens treated at Istanbul hospitals. He later held a joint press conference with his Turkish counterpart, Efkan Ala, at the Istanbul Governorate, situated near the site of the blast. At the press conference, Ala said: "Global terrorism is a threat to all of mankind, and it necessitates an efficient cooperation between countries. We need strong cooperation without discrimination to fight against terrorist organizations, regardless of their identities. For its part, Turkey pursues serious efforts to that extent. Turkey fights terrorist organizations that both emerged in the Syrian conflict as well as others such as the PKK," he said, referring to the terrorist organization that has launched attacks in Turkey since the 1980s, killing civilians and security forces. "I would like to thank Germany for its close cooperation in counterterror efforts," he said.

Outlining Turkey's work against Daesh, Ala said security forces detained 3,318 people as part of efforts against Daesh and other terrorist organizations since they emerged in Syria, and arrested 847 out of 3,318 suspects. "A substantial number of them are foreign nationals. On this occasion, I would like to call on their countries of origin as well as the countries they left to travel to Syria [to join Daesh]. They should impose strict security measures," he said. Ala praised Germany's "open cooperation" on the issue. "Turkey banned 35,970 people from 124 countries so far from entering the country and 387 of them are German citizens. This is the result of our cooperation," he added. Ala stressed that Turkey also deported 2,894 people from 92 countries for their connections to Daesh of which 94 of them were German nationals.

"Turkey exerts significant efforts for counterterror activities. We have a determined approach. In the week before [the Sultanahmet bombing], authorities detained 220 suspected members of Daesh. One person was also detained on Tuesday evening in Istanbul," he said. A woman was detained in a counterterror police raid at an apartment building in Istanbul's upscale Nişantaşı neighborhood. It was unclear whether Ala was referring to her. The woman was later released according to Doğan News Agency (DHA), which identified her as Leyla Ş., a businesswoman who lost her cellphone. The raid and her subsequent detention was a result of a phone call between the woman and the suicide bomber, DHA said. Police are now investigating who stole or found the cellphone and contacted Fadli.

Also yesterday, three Russian nationals were detained in Antalya, a Mediterranean city popular among Russian tourists. Three suspects are accused of membership in Daesh and providing logistical support to the militant group.

Anadolu Agency (AA) reported that 65 people were detained in raids in the capital, Ankara, İzmir in western Turkey, the provinces of Kilis and Şanlıurfa near the Turkish-Syrian border and the southern cities of Adana and Mersin. Reports said the suspects were planning attacks in large cities. Ala said they would share every bit of information on investigation with Germany.

"This is an attack against humanity. [The victims were] our guests, and it is an attack we view to be as horrible as an attack conducted against our own citizens. This is an attack against our country and nation. We have to adopt a firm approach without any precondition against those attacks," he said. Ala stressed that Turkey cooperates and will continue to cooperate with all countries against terrorism, adding that such attacks "happen in any country." "But they will not be able to achieve what they wanted by these attacks if we stand together and do what is necessary to stop them," he said.

The minister called on all tourists, "guests of Turkey," to feel safe in the country "like our 78 million citizens feel." "All tourists in our country can continue their vacation here safely and should not hesitate. We took all security measures," he assured the visitors.

The identity of the suicide bomber was detected by his fingerprint that was entered into the database of the Turkish National Police after he registered at the Migration Directorate in Istanbul last week as part of a procedure for those entering from Syria. Ala said they could not track down the suspect before the attack as he "wasn't among our targets [as a suspected Daesh member], nor was he among suspects whose information was supplied to us by other countries."

De Maiziere said the investigation into the attack so far indicated it did not specifically target German citizens. Germany is part of the U.S.-led international coalition against Daesh in Syria although its military role is confined to providing reconnaissance. He said it cannot be said that the attack was connected to Germany's contribution to fight against international terrorism. Echoing Ala's remarks, the German minister said the attack targeted all of humanity, and pledged that Germany would increase cooperation with Turkey against terrorism. He emphasized that although the German Foreign Ministry cautioned its citizens to stay away from crowded places in a warning issued immediately after the attack, there was no reason for German visitors to cancel their trips to Turkey.

The German minister said they would not step back in the face of terrorism. He added that they were both determined to fight terrorism and find political solutions to end it. De Maiziere stressed that terrorism would not thwart people's freedoms such as freedom of travel. He also said they would discuss further cooperation during Ala and other Turkish officials' visit to Germany next week for a summit on migration.

Turkey and Germany maintain close ties though Ankara occasionally criticizes the European Union countries and international community in general for its reluctant approach to the Syrian crisis. Turkish leaders say stemming flow of foreign fighters to Daesh from Europe especially is vital to curb the power of the militant group, and urges for more cooperation on intelligence to stop Daesh recruits from entering to Syria through Turkey.
RELATED TOPICS