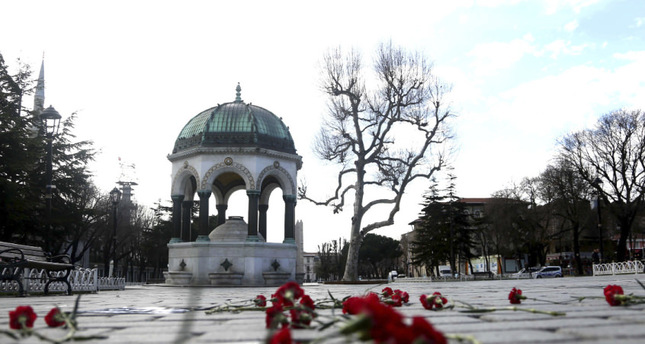 Carnations laid on the ground of Sultanahmet Square near the blast site, with the German Fountain seen in the background. (FILE Photo)
by Anadolu Agency Mar 03, 2016 12:00 am
Prosecutors have completed an investigation into a terrorist attack on a police station in Istanbul's Sultanahmet tourist district last year that killed an officer.

Diana Ramazanova, 18, killed herself and police officer Kenan Kumaş when she set off a grenade on Jan. 6, 2015. She wounded two other officers.

Prosecutor Murat Çağlak is seeking jail terms of up to 18 years for five suspects who are alleged to have helped Ramazanova, a Russian national from Dagestan.

Ramazanova, reportedly the widow of a Norwegian jihadi, arrived in Turkey from Moscow on June 17, 2014. Telephone records showed she stayed with Abu Aluevitsj Edelbijev in Istanbul before travelling to Syria the following month.

She returned to Turkey illegally and planned the suicide attack after Edelbijev was killed in Syria.

According to the indictment, Ramazanova walked around Sultanahmet on the day of the attack before entering a police station near the famous square and detonating a grenade at 5.13 p.m. local time (1513GMT) after pretending to have lost her wallet.

She had also researched Shia mosques in the city.

The five male suspects - a mix of Turkish and foreign males - are accused of membership of a terrorist organization and people smuggling and will stand trial on April 14.

Sultanahmet, famous for tourist sites such as the Blue Mosque and Hagia Sophia Museum, was targeted by a suicide bomber on Jan. 12 this year when 12 German tourists were killed.
Last Update: Mar 04, 2016 5:23 pm
RELATED TOPICS