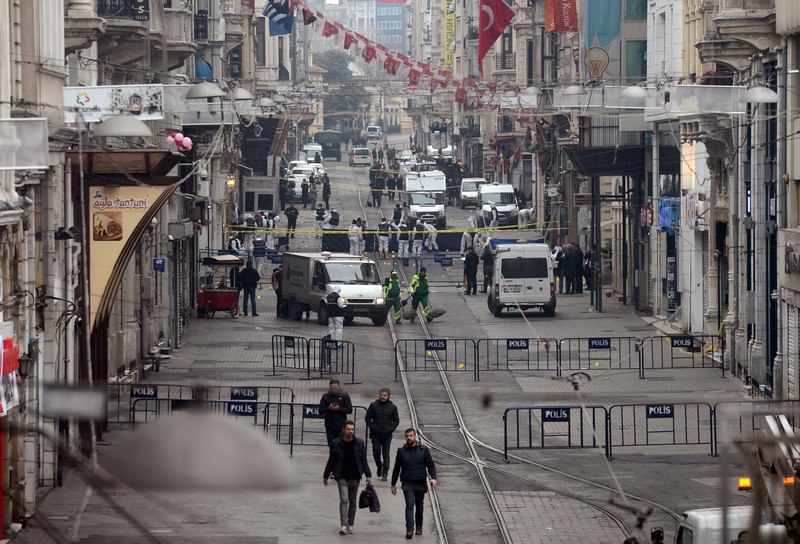 World leaders from around the globe have expressed their outrage at yet another terrorist attack -fourth of its kind- in Turkey, this time on Istanbul's famous Istiklal Street, which has left at least five people, including a bomber dead.

Turkish Health Minister Mehmet Müezzinoğlu said earlier that out of the 36 injured in Saturday's suicide attack, 12 were foreign nationals.

The U.S. condemned the terrorist attack through a statement released by Department of State Spokesperson John Kirby. "The United States strongly condemns the terrorist attack today on Istanbul's Istiklal Avenue. We extend our deepest condolences to the families of those killed and our hopes for a quick recovery for those wounded."

"The United States stands in solidarity with our NATO Ally Turkey in combating the common threat of terrorism. This vicious attack is the latest in a series of indefensible violence targeting innocent people throughout Turkey – Turkish citizens and international visitors alike. These acts of terrorism only reinforce our determination to support all those across the region working to promote peace and reconciliation." the statement said.

A similar statement of condemnation also came from the White House.

"The United States condemns in the strongest possible terms today's terrorist attack in Istanbul, Turkey," U.S. National Security Council spokesman Ned Price said in a statement released by the White House on Saturday, adding that two of the deceased were dual American-Israeli citizens.

The statement said, "Two American citizens were among those killed in this heinous attack. Our thoughts and prayers go out to the families and loved ones of those killed, and we wish a speedy recovery to those injured."

"I strongly condemn this morning's terrorist attack on a pedestrian avenue in central Istanbul, [which is] yet another terrorist outrage targeting innocent civilians and our ally Turkey," Stoltenberg said.

"My deepest sympathies go out to the families of the victims, and to the people of Turkey. My thoughts are also with all those who have been injured.

There can be no justification for terrorism. NATO allies stand with Turkey, united in our determination to fight terrorism in all its forms," he added.

France's foreign minister Jean-Marc Ayrault also condemned the attack and said "I strongly condemn this despicable and cowardly act that has caused the death of several people," in a statement, and added that Paris stood in solidarity with Turkey.

British Consul-General in Istanbul Leigh Turner tweeted: "Shocked and saddened by news of #Istiklal bombing today. My thoughts are with all those affected and their families".

Greek Foreign Ministry said in its statement: "All of the Greek people and the Greek government express their abhorrence at the new terrorist attack that took place today in Istanbul and resulted in the death and injury of innocent citizens.

Albanian Foreign Ministry said in its statement: "We express our most sincere condolences for the lives lost as a result of recent repeated barbaric acts in Turkey".

Albania stands shoulder-to-shoulder with the friendly Turkish government and people in their efforts in the fight against terrorism, it added.

Kosovo President-elect Hashim Thaci tweeted: "I'm shocked by yet another attack against Turkey in Istanbul. We express deepest sympathy and resolve to be by the side of the Turkish people".

The U.S. Consulate in Istanbul tweeted: "Saddened, shocked by the explosion in Istiklal. We mourn with families of the lost, and we wish the injured a speedy recovery".

"We are deeply anguished and saddened to learn about the suicide bomb blast in which several innocent lives have been lost," Pakistani Foreign Ministry said in a statement.

"As always, Pakistan stands in strong solidarity with the brotherly people of Turkey and is sure in its belief that they will succeed in their resolute fight against terrorism and defeat this scourge decisively," it added.

The Organization of the Islamic Conference's Islamic Educational, Scientific and Cultural Organization also condemned the attack. "We harshly condemn this heinous attack against innocent civilians," it said.

Müezzinoğlu said in a later statement that out of the 36 injured 12 were foreigners. Wounded foreigners include six Israeli, two Irish, one Icelander, one German, one Emirati and one Iranian citizen. One of the heavily wounded was reportedly a child.