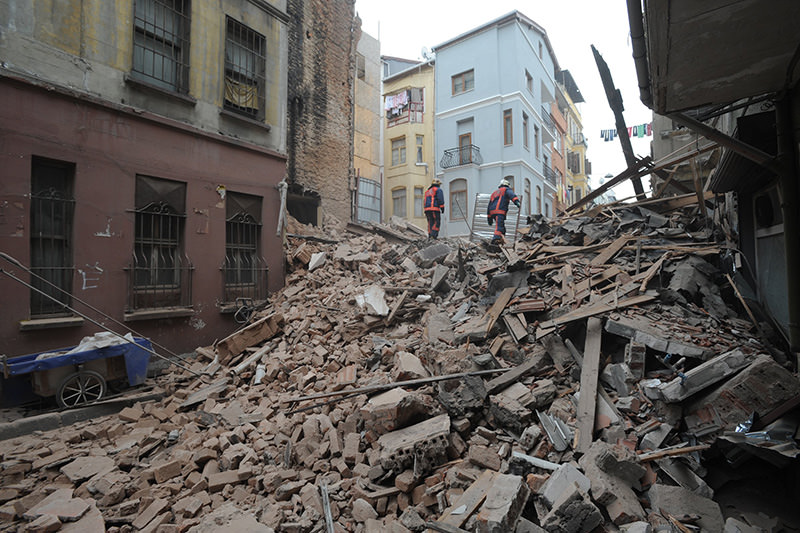 A five-storey tall residential building in Istanbul collapsed on Friday, causing residents in the neighborhood to panic.

The building, located near Taksim Square in Beyoğlu district was reportedly empty due to ongoing renovation.

Hearing the cracks coming from the building, locals emptied the street to avoid casualties and injuries, while the collapse of the building was captured by cameras.

Search and rescue units and firefighters arrived at the scene as a precaution to check whether anyone was left under the rubble.

The building was located in the area also known as Tarlabaşı, which houses Istanbul's oldest multi-storey buildings, with some dating back 150 years old. Most buildings located in the area are currently empty due to an extensive urban renovation effort initiated by Beyoğlu Municipality, whereas several other buildings had collapsed in recent months.

The neighborhood was populated by Istanbul's Greek and Christian communities who left the city in final years of the Ottoman Empire and early years of the Republic.

The neighborhood was initially populated by poor immigrants from Turkey's countryside, who often could not afford to reparations for the buildings. After a newly-built avenue separated the neighborhood with the rest of Beyoğlu district in early 1980's, added with the rapid change and deterioration of entertainment business in the area, the neighborhood soon made a reputation as the crime center of Istanbul with poor living conditions.