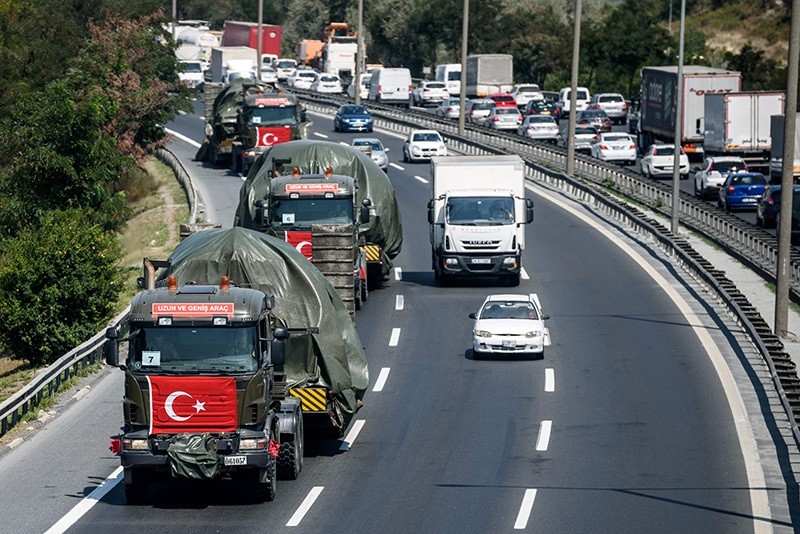 In a radical decision following the coup attempt on July 15, Turkey started the relocation of military bases located in city centers to the outskirts of small towns. The move is part of efforts to restructure the army, including enlarged civilian control over the armed forces

Scenes of tanks rolling downtown, and vast military bases occupying the heart of cities, will be part of Turkey's past and not of the future, as the relocation of military bases from city centers started yesterday.

The government started implementation of a project to expand civilian control of the military and relocate military bases, following the coup attempt on July 15 by the Gülenist Terror Group (FETÖ). During the coup attempt, Gülen Movement-linked coup plotters were quick to mobilize their resources, from tanks and fighter jets to troops, seeking to seize strategic facilities located in city centers.

The Baştabya Barracks of the army's 66th Mechanized Infantry Brigade Command was the first base to be relocated from Istanbul, where several military bases are located at the heart of Turkey's most populated city.

In a ceremony yesterday amid tight security measures, six trucks carrying armored military vehicles left for Çorlu and Beşiktepe, two towns in the province of Tekirdağ, west of Istanbul. Baştabya is among three barracks of the Infantry Brigade Command in Istanbul where artillery and tank units are deployed. Tanks operated by coup plotters rolled on the streets of Istanbul on the night of July 15, as a military junta linked to FETÖ sought to seize power. An interesting figure was found in a tank dispatched from Baştabya Barracks on the night of the putsch attempt. Mithat Aynacı, a former police chief detained earlier for FETÖ links, was captured inside the tank and was the first non-military Gülenist found working with the putschists during the coup attempt.

In the capital Ankara, the Etimesgut Barracks for Armored Units was relocated to Şereflikoçhisar, some 148 kilometers south of the city.

Authorities plan to complete the relocation of bases in Ankara and Istanbul by Sept. 11.

Prime Minister Binali Yıldırım announced earlier this month that all barracks used by coup plotters on July 15 would be relocated, and Akıncı air base, a stronghold for the coup plotters and the place where the Chief of General Staff was briefly held hostage by the putschists, would be shut down. "We have to focus on our border security, and these changes will make the Turkish Armed Forces stronger and better mobilized against security threats."

Defense Minister Fikri Işık said in a recent interview that bases in city centers would be relocated, and would be "opened for public use," although he did not elaborate. Akıncı air base will be converted into a "democracy park," authorities announced earlier, in a tribute to the civilians, military and police officers who were killed while resisting the putsch attempt.

Istanbul hosts five major military bases which cover an area of 3,756 hectares, in the middle of heavily-populated areas. These military bases were vital for the coup plotters to take over city centers, but a strong public resistance caught the putschists off guard. Several civilians parked their trucks at the gates of bases to prevent tanks and other military vehicles operated by pro-coup troops from leaving the bases on the night of the coup attempt.

The overhaul launched after the coup attempt is not limited to the relocation of bases. Military schools which were used as recruitment centers by FETÖ will be shut down, and new schools completely under control of the Defense Ministry will be established.

In a sign of more civilian authority over the all-too-powerful army, the Prime Minister will now be able to promote military personnel, if there is an emergency need for a higher-ranking officer such as after the mass purge of Gülenists following the attempted coup. A recently-issued statutory decree allows generals to be quickly promoted when the need arises. Other planned changes to the military include the Gendarmerie Command being subsumed under the Ministry of the Interior, although no concrete steps have yet been taken.
Last Update: Aug 22, 2016 5:56 pm
RELATED TOPICS