2,400 swimmers gear up for transcontinental race across Istanbul’s Bosporus 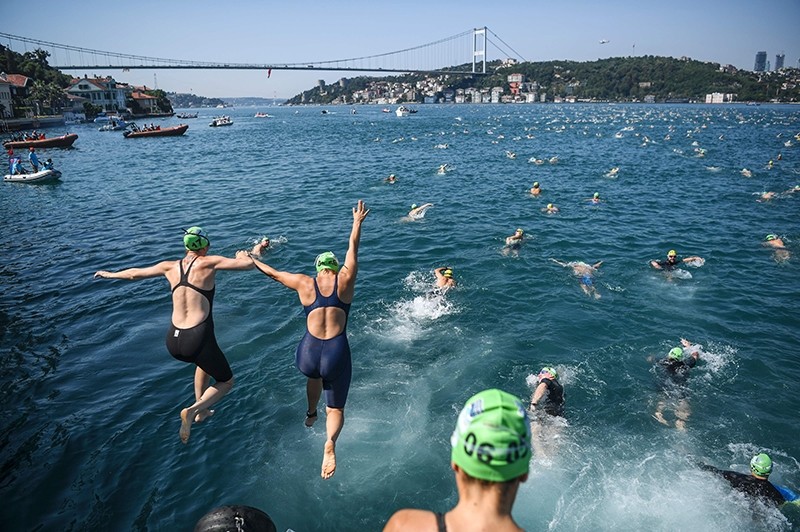 Over 2,000 swimmers from 55 countries are gearing up to swim from Asia to Europe in the 30th Samsung Bosporus Cross-Continental Swimming Race, the world's only transcontinental race, across Istanbul's Bosporus Strait this Sunday.

Starting at 10 a.m., athletes will swim 6.5 kilometers (4 miles) from Kanlıca pier on the Asian side to Kuruçeşme Cemil Topuzlu Park in Europe.

The race's organizers said at a press conference on Friday that there was huge interest from around the world and that over 4,400 people applied to participate in the race, including 3,269 men and 1,161 women. Only 2,400 were eligible ultimately and half of them are foreigners.

Organizers said that applications were closed only 14 minutes after they were opened in January due to overwhelming demand. In the end, 2,400 were selected in qualifiers held earlier across Turkey. Organizers also said there was such a huge demand from Russia and Ukraine that they had to put a quota on the number of people applying from those countries. Following Russia and Ukraine, numerous athletes from the U.K and U.S. also applied. Applicants' professions range from professional swimmers to academics and politicians and students.

During the race, the Bosporus is closed to all ship traffic. Boats accompany the swimmers along the course to ensure safety.

Last year, Russians took first place in both the men's and women's races.

The cross-continental race has gained international renown since it was first organized by the Turkish National Olympic Committee in 1989, with the participation of only 68 swimmers. Last year, the World Open Water Swimming Association (WOWSA) named the Bosporus course as the best in the world. And, in 2016, it was named "offering of the year."