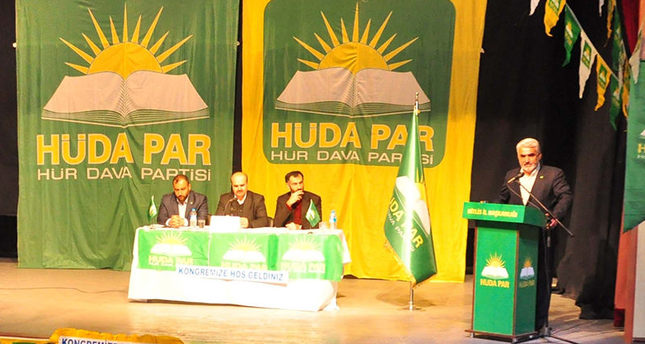 by Nurbanu Kızıl Feb 02, 2015 12:00 am
The chairman of the Free Cause Party (Hüda-Par), Zekeriya Yapıcıoğlu, has claimed that the Dec. 17 operation, which was allegedly carried out by members of the Gülen Movement, was a coup attempt disguised as a corruption probe.

Speaking at his party's provincial congress on Sunday, Yapıcıoğlu claimed that the Gülen Movement may have tried to attempt a coup against the government through the use of their agents in the judiciary and police and said that he is not making the allegations for the sake of accusing a certain group of people.

He also touched on the issue of security and said that it is necessary to make reforms to the domestic security package in order to prevent another catastrophe similar to the Kobani protests, which took place in Cizre and Diyarbakır in October. "It is crucial for the security measures to be revised to give them more prerogatives to prevent the spread of violence and damage during protests."

To illustrate his point, Yapıcıoğlu said that during the Kobani protests, pro-PKK protestors raided mosques and other places with machine guns for over eight hours, but the governor of Şırnak said that he "was not aware of the incident" and said he would have interfered if he was informed.

Yapıcıoğlu criticized provocateurs for stirring violence on the streets, intentionally paving the way for a state of emergency and a coup. "Do not set brothers and sisters against one another," he said, calling on all provocateurs to renounce fooling the people for the sake of their agendas. He also said that Islam as a religion is one of the most unifying forces in the country to bring people together regardless of their ethnic backgrounds.

Hüda-Par was founded in 2012 in southeastern Turkey as a Kurdish-based conservative political party.

The Kobani protests took place on Oct. 5-6 when the Syrian town of Kobani came under attack by Islamic State of Iraq and al-Sham (ISIS) militants and rumors spread about the Turkish government not doing enough to help the people there who are mostly Kurdish.

A total of at least 12 people were killed in the protests, which spread to different parts in the country and it is alleged that the perpetrators were supporters of the PKK, which is recognized as a terrorist organization by Turkey, the EU and U.S.

On Oct. 5, a group of young men who were distributing food to Syrian refugees for Eid al-Adha were chased down and brutally killed by attackers who were armed with machetes and guns.