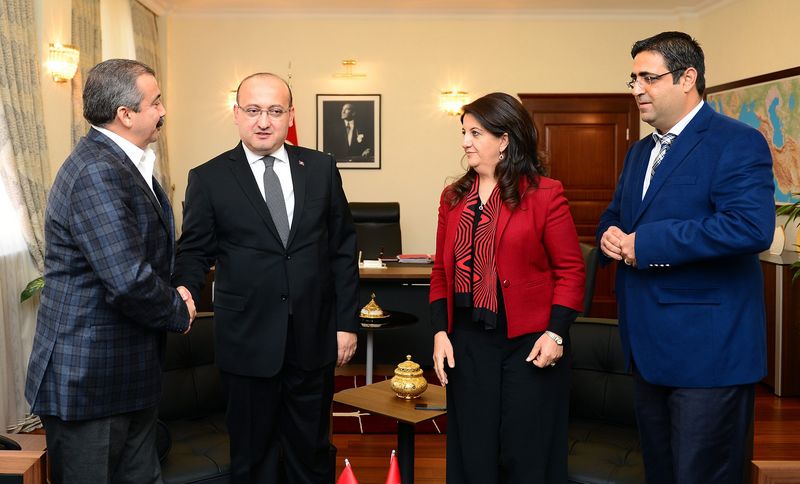 by Merve Aydoğan Mar 10, 2015 12:00 am
Government officials are expected to meet in Ankara on Wednesday to discuss the reconciliation process following the meeting at Dolmabahçe Palace in which the call for the PKK to disarm was discussed between the Peoples' Democratic Party (HDP) delegation and Deputy Prime Minister Yalçın Akdoğan, the Cabinet member who regularly holds talks with the HDP on the Kurdish issue. During the reconciliation process meeting that will be chaired by Prime Minister Ahmet Davutoğlu, the latest developments and the current stage of the process are to be comprehensively discussed. While the successful finalizing of the reconciliation process tops the government's agenda, the establishment of an assembly by the PKK and agreeing to the call made by its imprisoned leader, Abdullah Öcalan, is defined as one of the most significant topics prior to the upcoming elections both for the government and the Kurdish side by a prominent Kurdish columnist and ex-politician, Orhan Miroğlu, who spoke to Daily Sabah.

Following the second Cabinet meeting of 2015 at the Presidential Palace on March 9 chaired by President Recep Tayyip Erdoğan, Deputy Prime Minister Bülent Arınç held a press conference in which he said: "The reconciliation process is at an affirmative stage." Arınç continued by adding: "The [PKK's] establishing of an assembly and agreeing to lay down its arms is currently the most important focus. Although a similar call was made on the Kurdish side during the last Nevruz celebrations on March 21, it seems unlikely that it would be agreed to in such a short time." As the historic meeting at Dolmabahçe Palace in late February in which both sides made a joint public statement that they had agreed on a 10-point plan on which issues will be addressed at the negotiations on the peace and reconciliation process, Arınç said on March 9 that the government believes the assembly will be held by April and the topics included in the 10-point plan will be implemented.

Commenting on the upcoming meeting, Altan Tan, a Peoples' Democratic Party (HDP) Diyarbakır deputy, spoke to Daily Sabah and said that they want immediate steps to be taken in an effort to successfully finalize the reconciliation process. Tan also added: "There are a number of items that could be taken care of prior to the upcoming June elections. We want previously Kurdish-named towns to be renamed in Kurdish, as we expect a promise toward an establishment of a fully democratic constitution. We hope that the process will be finalized by the Nevruz celebrations."

As the meeting will also evaluate the reflection of Öcalan's call on the organization to lay down its arms throughout the region as well as in the Qandil Mountains in Iraq, Orhan Miroğlu said that the PKK establishing an assembly and agreeing to lay down arms tops the agenda of both the PKK leadership in the Qandil Mountains and the government. Miroğlu continued by adding that such meetings are no surprise as the reconciliation process has been an ongoing topic for the government as well as throughout Turkey.

"It is significant that the meeting is being held prior to the Nevruz celebrations on March 21, and following the historic meeting at Dolmabahçe Palace," Miroğlu said. He also added: "The Kurdish issue is now a global one, and Turkey is the most prominent actor on this topic." Davutoğlu announced on March 8 in the southeastern province of Mardin the long-term action plan for the Southeastern Anatolia Project (GAP), and said that the government will invest TL 26.7 billion ($10 billion) in the project. Miroğlu called it a highly significant step in efforts toward the reconciliation process. He further commented on the finalizing of the process and added: "The process cannot be finalized without an establishment of a new constitution. Although some of the points in the 10-point plan can be completed, the 10-point plan would have to be carried out by extending it over a period of time."