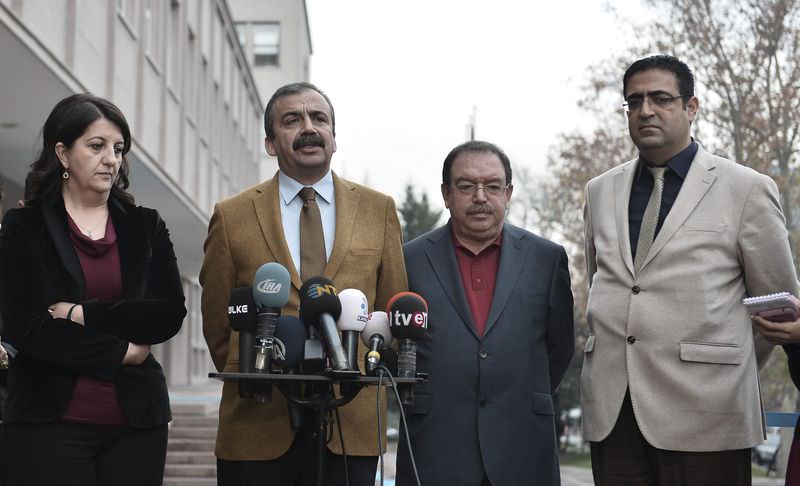 by Ayşe Şahin Apr 09, 2015 12:00 am
Peoples' Democratic Party (HDP) Co-Chair Selahattin Demirtaş has made it clear that it is necessary for a monitoring committee to be included in the visit to İmralı Island, where PKK leader Abdullah Öcalan is currently incarcerated, for negotiations to commence. He made the comments while speaking to journalists in a question and answer session on Wednesday.

Ankara and the HDP have been pursuing a reconciliation process to end the decades-long conflict between the state and the PKK, a process that was initiated by the ruling party to invigorate democracy. The process has recently reached a significant stage following a call from Öcalan during March's Nevruz festival for a congress to be held to abandon arms.

Although Öcalan's message during the most recent Nevruz celebration reflected his will for disarmament, in contrast to the messages he delivered on previous Nevruz celebrations, it remains relatively unsatisfactory to President Recep Tayyip Erdoğan, who has said he will continue to have reservations about the announcement until he sees concrete steps.

Erdoğan failed to hail the announcement as expected owing to his skepticism about the HDP's sincerity. "Peace cannot be achieved under the shadow of weapons," he said, stressing that disarmament is a condition to start the talks. However, HDP deputies – some openly, some implying – have suggested that they are waiting to see if the government adheres to the 10 items they put forward as being the basis of negotiations to lay down arms. This attitude has been utterly ruled out by Erdoğan, and Prime Minister Ahmet Davutoğlu has supported the president saying there can be no pre-conditions to disarmament.

Before his aforementioned remarks and a day after Öcalan's Nevruz message, Erdoğan stated his opposition toward the establishment of a monitoring committee and said he had not been informed about the issue, prompting questions about a possible rift between the ruling party Justice and Development Party (AK Party) and Erdoğan.

Deputy Prime Minister Bülent Arınç triggered further debate by saying: "Forming a monitoring committee was one of the steps we have taken so far for the reconciliation process. Our government finds it suitable. We have an existing road map on who will carry out which duty. It is the government who runs the country, and the responsibility falls on the government." Deputy Prime Minister Yalçın Akdoğan, who was previously tasked with conducting the process, had also hinted at the establishment of a monitoring committee.

However, Arınç and Akoğan, in a bid to clear misunderstandings over the matter, admitted that it was their fault if Erdoğan was not efficiently informed on the developments of the process. They both later said that they would stick to the road map drawn by Erdoğan on reconciliation efforts as "he is the one who initiated the process," ruling out speculations of a rift with Erdoğan.