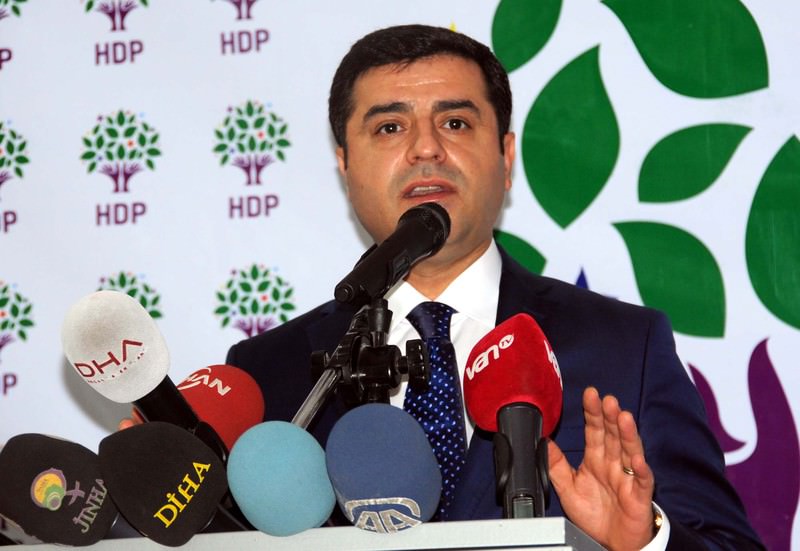 by Daily Sabah with Reuters Aug 08, 2015 12:00 am
The leader of Turkey's pro-Kurdish party called on Saturday for the terrorist PKK group to "remove its finger from the trigger" and for the government to launch talks.

The PKK announced it was stepping up attacks in mid-July over what it said were violations by Turkish forces of a 2013 ceasefire. Turkey began an air campaign against PKK camps in northern Iraq on July 24.

Peoples' Democratic Party (HDP) leader Selahattin Demirtaş was speaking a day after six people were killed in clashes between security forces and PKK terrorists in the mainly Kurdish southeast.

"Today we call to both sides: the PKK must immediately remove its finger from the trigger and declare it will observe the ceasefire," Demirtaş told reporters in the southeastern city of Van.

The flare-up in violence comes at a time of political uncertainty in Turkey. A coalition has yet to be established, raising the possibility of a snap election.

Ankara launched a peace process with the PKK in late 2012 and a ceasefire declared in 2013 had largely held until now.

Turkish jets have hit ISIS positions in Syria, as well as PKK terrorist camps in northern Iraq. Ankara has also allowed the U.S.-led coalition targeting the ISIS militants to use its air bases.

On Friday evening terrorists fired a rocket at an armoured car in the town of Cizre, killing a police officer and wounding another, security sources said.

Earlier that day, three people were killed and seven wounded during clashes between police and PKK in the town of Silopi, like Cizre in Şırnak province, close to Turkey's borders with Syria and Iraq.

In two other separate incidents in Van and Ağrı provinces, militants killed two soldiers, bringing the death toll among Turkish security forces since July 20 to 24.

The PKK is also accused of using civilians as human shields in its camps.
Last Update: Aug 08, 2015 3:08 pm
RELATED TOPICS