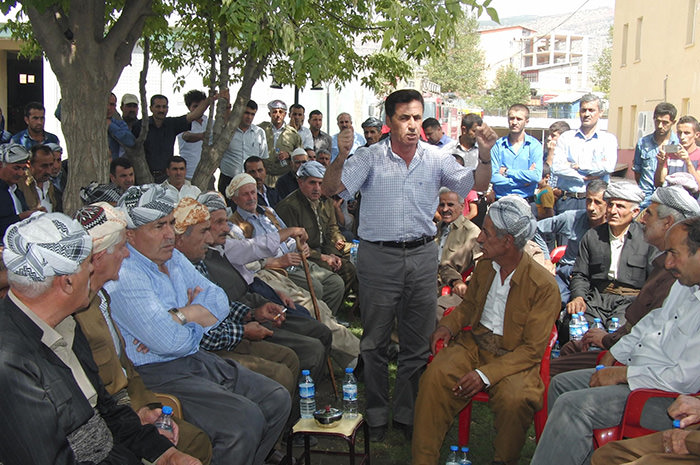 Gerdi tribe members release statement regarding recent PKK attacks in Turkey's southeastern Hakkari (DHA Photo)
by Mehmet Çelik Sep 10, 2015 12:00 am
As the tension increases between Turkish security forces and PKK militants terrorizing the country, discomfort among the people in the region due to the surge of attacks by the PKK has manifested itself through dramatic public statements by the members of prominent Kurdish families and tribes in the region.

On Wednesday, nearly 400 members of the Gerdi tribe in southeastern Hakkari's Derecik town came together to announce their stance against the terrorist PKK and side with the Turkish state and Masoud Barzani, the president of the Iraqi Kurdistan Regional Government (KRG).

"We will not embrace the PKK and will not stand side with the state," the town's mayor, Ekrem Çetinkaya – who is affiliated with the Gerdi Tribe – told reporters.

"We believe that the current terrorist incidents are damaging to the people of the region," Çetinkaya said, who further noted that the tribe includes 25,000 members in Derecik and its villages, and around 40,000 members in northern Iraq.

The tribe members have then expressed their views regarding the issue and reportedly sent a letter to Barzani in northern Iraq to inform him about their stance.

Meanwhile, speaking to Daily Sabah, Perinaz Yaman, a businesswoman and leader of a prominent family in Batman province, said the Kurdish people in the region voted for Peoples' Democratic Party (HDP) in the June 7 elections with hopes for a political solution to the Kurdish issue; however, such hope has not been met and it shows given the recent rise in PKK attacks.

"The HDP said they want to become part of the peace process and people put their trust in them and gave them a chance. However, the HDP has not met this expectation and has exploited the public's trust," Yaman said.

"It is true, in the past Kurds in the region faced state oppression; however, this is now left in the past and we no longer have state oppression against Kurdish people. As such, the recent attacks have destroyed the peace atmosphere in the region. Before the recent events, we could go out at night or at any time of the day; business was booming. But now, everyone stays in their home due to fear. There can be no business if business owners cannot open their stores," she added.

Perinaz Yaman said people in the region say 'Edi Bese' in Kurdish (that's enough) to the terror and are hopeful of a re-establishment of the peaceful atmosphere in the region despite the recent violence.

Also speaking to Daily Sabah, Mahmut Dündar, a member of the prominent Dündar family in Mardin province, expressed his concerns regarding the increased tensions in the region, saying people have gone into their shells as they do not want to be a part of the conflict.

"People are very uneasy and anxious, but they have not lost their hope in peace. The PKK attacks have also damaged businesses severely, as exports have fallen more than 30-40 percent," he said.

Abdurrahman Kahraman, a member of the prominent Kahraman family, also from Mardin, said the PKK exploited the reconciliation process and established a perception of fear in the public in the region during the continuation of the process.

"People have not opposed the government's military operations against the PKK despite calls to rise against the forces. This is because people in the region do not approve of the PKK," he said.

"Restarting the reconciliation process is of crucial importance for the region's people as it is a humanitarian and a moral solution to the conflict. Weapons are not a solution to ending the ongoing fight in the region," he added.

Kahraman also said with the reconciliation process the region had achieved social, economic and a psychological ease that benefited the people there.

On Sept. 1, a group of 120 influential leaders from prominent families of Turkey's eastern and southeastern regions also made a public call to the PKK in Şırnak province, urging the terrorist organization to lay down arms and leave the country.

Leaders from the provinces of Diyarbakır, Şanlıurfa, Mardin, Şırnak and Muş made the plea in a joint press statement. "We want armed members to stop violence and leave the country as soon as possible to ensure peace rules again in Turkey," said Mehmet Şirin Akçay, a prominent figure in the region, who read the statement publicly. "Our region needs peace, tranquility and common sense, not weapons," he said, and added that the community leaders are ready to support to the reconciliation process with the PKK.

The fighting between the PKK and the security forces saw a fragile lull for a period of two-and-a-half years from early 2013 in what has been labeled the reconciliation process.

After Turkey's June 7 parliamentary elections, the Kurdish Communities Union (KCK), an administrative PKK organization, declared the end of the cease-fire which the PKK's imprisoned leader Abdullah Öcalan had negotiated before and starting after July 11 initiated attacks against Turkish security forces.

The Turkish government has intensified its counterterror operations following the recent attacks carried out against Turkish forces and civilians by the PKK, which is recognized as a terrorist organization by the U.S., EU and Turkey.

Formed in 1978, the terrorist group has been fighting the Turkish government for an independent state until the early 2000s. The group then shifted its goal to autonomy in the predominately Kurdish inhabited regions of Turkey.