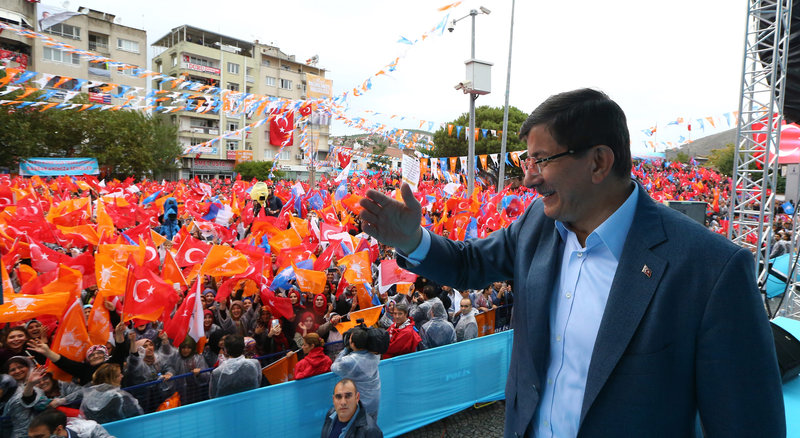 by daily sabah Oct 24, 2015 12:00 am
With slightly over a week left until the Nov. 1 parliamentary elections, interim Prime Minister and Justice and Development Party (AK Party) Chairman Ahmet Davutoğlu continues to travel to provinces to meet with nongovernmental organizations, business communities and the general public. Davutoğlu reaffirmed his commitment to end terror in statements on Friday made at the ordinary general assembly of the Confederation of Turkish Real Trade Unions (HAK-İŞ) in Ankara. With escalating terror attacks by the PKK and the Islamic State of Iraq and al-Sham (ISIS), Davutoğlu made a call to the leaders of all political parties to adopt a common stance against terrorism.

The leaders of political parties showed an uncompromising stance throughout coalition talks after the June 7 elections. Davutoğlu, since the previous elections, has urged for unity and calm. In İzmir at an election rally on Friday he said: "While Turkish soldiers continue to combat terror, none of the other parties have taken on any responsibility." He also said that the AK Party will carry even further and stressed the significance of Turkey's unity and brotherhood.The AK Party has readied for the Nov. 1 elections with pledges to make comprehensive reforms to the judiciary, more equality, a new constitution and the status of Alevi cemevis. While the AK Party is going into the elections with a reformist perspective, as Davutoğlu calls it, it further pledges that the government will continue to fight the PKK until public order is restored and the terrorist group "buries" all its weapons. During his visit to the eastern province of Van on Tuesday, Davutoğlu spoke with youngsters practicing taekwondo and said that Turkey expects the youth to build the country's future in solidarity, "strengthening their attachment to the nation."

Although increasing terror in eastern and southeastern provinces causes great concern among residents, another widely voiced issue is the state of the economy. Speaking to a large crowd in İzmir during the AK Party's Brotherhood Rally, Davutoğlu said that Turkey began to expand after 2002 and further claimed that his party has connected people to the state. Additionally to the youth, the AK Party is focusing on agriculture workers and has emphasized that the AK Party will remove taxes on fertilizers in an effort to support agriculture in Turkey. With respect to the economy, Davutoğlu has said at election rallies that the AK Party pledges to increase the minimum wage to TL 1,300 ($436) per month, further adding that it is subject to an increase in line with the level of danger the job poses.

As voters ready for the Nov. 1 early elections, the findings of a survey conducted between Oct. 13 and Oct. 19 by Konsensus Research Company indicate the AK Party will receive the most votes in the Nov. 1 elections. From the results it predicted that the AK Party would secure 272 seats in Parliament, just four short of the number necessary to form a single-party government, and forecasts 146 seats for the Republican People's Party (CHP). It found a drop in support for the Nationalist Movement Party (MHP) after the June 7 elections, which would leave it with 57 deputies while the Peoples' Democratic Party (HDP) would receive 75 deputies, according to Konsensus's calculations.

Many research companies are releasing their latest surveys, with one of the most recent being from MAK Consulting from Oct. 12 to Oct. 17, which found the AK Party as the majority with 43.5 percent support. In addition to MAK's findings, an Oct. 3 to Oct. 7 survey by PollMark found AK Party support at 43.9 percent.
RELATED TOPICS