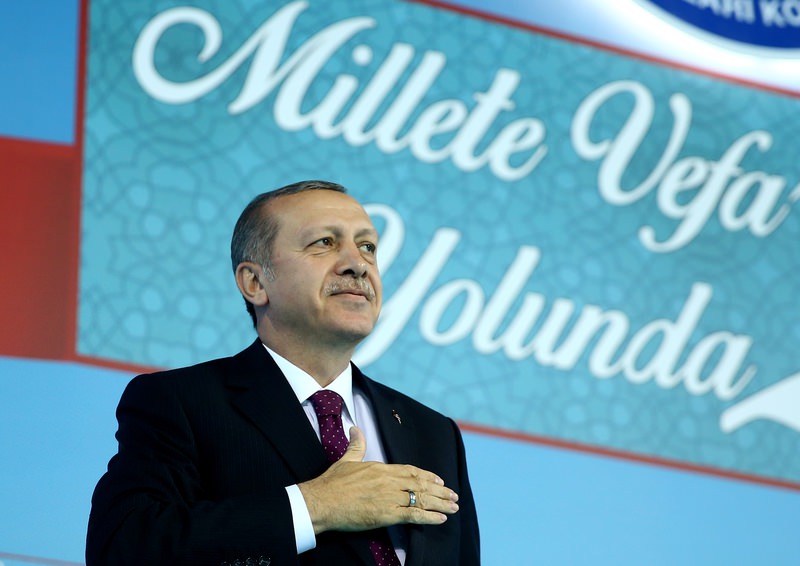 by daily sabah Oct 26, 2015 12:00 am
President Recep Tayyip Erdoğan vowed to take necessary steps on Turkey's southeastern borders against the threat posed by the PKK's Syrian wing Democratic Union Party (PYD) in a speech he gave on Sunday at an event organized by the Confederation of Public Servants' Trade Unions (MEMUR-SEN) in Ankara.

"ISIS takes over Tal Abyad, then leaves the city. After that, PYD takes control of the town. This is a collective game of war. 95 percent of Tal Abyad is composed of Arabs and Turkmens, while only the 5 percent of the town's total population is Kurds. PKK-affiliated PYD declared Tal Abyad as one of its so-called 'cantons.' Turkey will do whatever it takes to overcome this threat," he said.

Reminding the clashes between the ISIS and PYD terrorist organizations in northern Syrian city of Kobani and Turkey's support for the people of the region, he said that Turkey has hosted over 200 thousand people fleeing the town after the ISIS threat.

Ankara voiced its concern regarding the PYD's armed wing, the People's Protection Unit (YPG) receiving dozens of tons of arms from the U.S. since it might pose a threat to Turkey's national security if arms are transferred to the PKK.

Early in October when asked whether Turkey should conduct military operations against the PYD and YPG, Prime Minister Ahmet Davutoğlu, said Turkey would not hesitate to strike at any group that poses a threat to national security. Reportedly, Davutoğlu's concerns are based on intelligence reports that suggest arms delivered to the YPG ended up in PKK hideouts in Northern Iraq.
Last Update: Oct 26, 2015 2:00 am
RELATED TOPICS