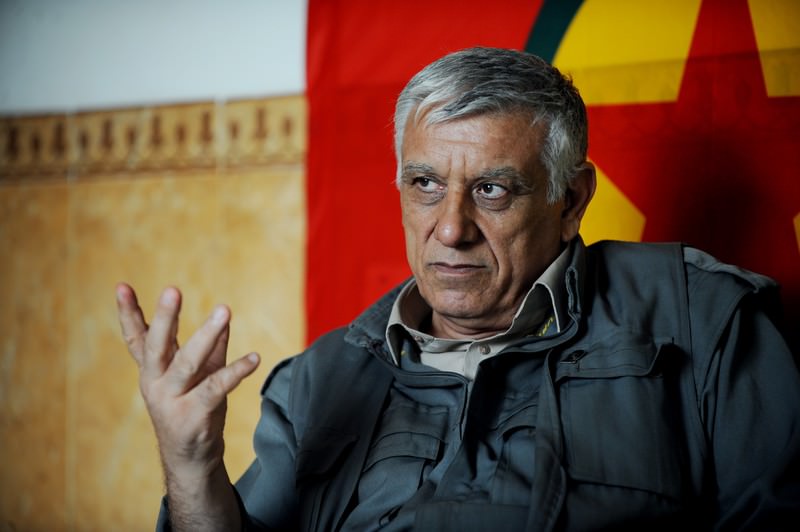 by Daily Sabah Dec 01, 2015 12:00 am
The PKK's acting leader Cemil Bayık, in an interview with BBC Turkish, dismissed imprisoned PKK founder Abdullah Öcalan and said he cannot make decisions or lead the organization. He also asserted that the Peoples' Democratic Party (HDP) passed the 10-percent national election threshold thanks to the PKK resisting the Turkish state.

Labeling Öcalan as "a hostage in the hands of the state," Bayık declared himself and other co-leaders as the sole powers leading the PKK. "We are responsible for the practice. Apo [Öcalan] is not. Apo can neither lead the movement in practice nor make a decision on these issues," Bayık contended.

When asked about whether Öcalan can urge all PKK elements to leave the country, Bayık firmly ruled out his chances of making a decision, saying, "Only we can decide on it. Neither the HDP nor Apo can. Apo is a hostage in their hands. What decision can he make under these circumstances?"

President Recep Tayyip Erdoğan and Prime Minister Ahmet Davutoğlu have repeatedly underlined that the fight against the PKK will continue until all PKK elements are out of the country for good. Erdoğan said: "The reconciliation process is now in the freezer because what is being done is pretty much clear. The ongoing operations against the PKK will continue until the organization leaves the country for good."

Bayık also spoke of a tough winter period during which he expects a "severe war." In addition, he argued that the PKK has no share in the clashes against security forces.

Having repeatedly pointed to the PKK for the number of votes the HDP receives, Bayık once again claimed responsibility for the HDP being in Parliament. "Had we not resisted the Turkish state, the HDP and the democratic forces would not have been able to get into Parliament on Nov. 1," Bayık argued.

Bayık also contended that the Justice and Development Party (AK Party) has spread fear in order to prevent people from going to the ballot boxes. When asked about what he makes of the voter turnout rate not dropping but increasing, Bayık rebuked the HDP for its decision to not organize rallies during the campaign season.
Last Update: Dec 01, 2015 1:53 am
RELATED TOPICS