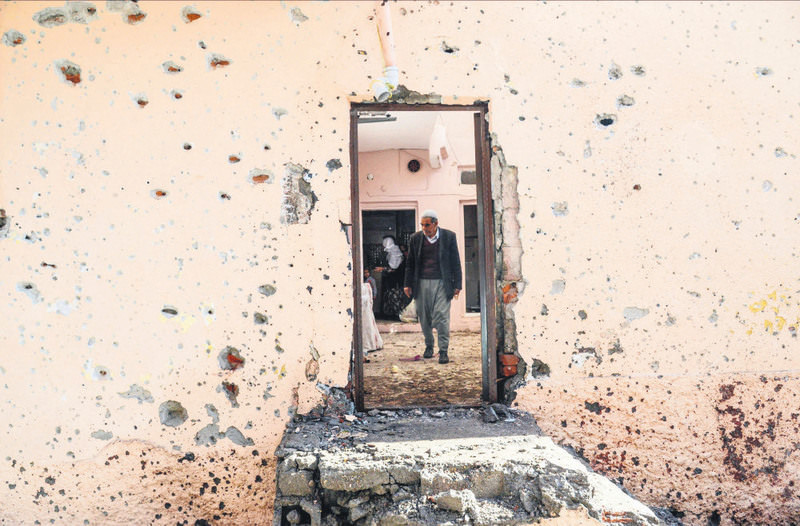 The militants had opened fire on the mosque, damaging its walls, door and windows.

Following the announcement of ending the cease-fire with the state on July 11, causing the termination of the reconciliation process, the PKK increased its attacks and the government then began to fight the terrorists, conducting the first airstrike on PKK headquarters in Northern Iraq's Qandil Mountains on July 24.

Reportedly, PKK activities had been maintained in clandestine ways since the June 7 general elections and more than 2,000 acts of violence by the PKK have been recorded since January 2015. Three civilians, two soldiers and three police officers were also killed in the period.

Many terrorists have been killed since the beginning of the operations, while shelters, emplacements and ammunition depots have also been destroyed, causing a restriction of maneuverability for the PKK.

Due to the heavy casualties in clashes with security forces, more than 1,700, according to official figures, the PKK had sharpened its focus on armed conflicts in urban areas, apparently to make the anti-terror struggle more complex.

The PKK's youth-wing, the Patriotic Revolutionary Youth Movement (YDG-H), stood out in this process, covering their faces, they made life miserable in the region with arson, roadside bombs and ambushes. With these disruptions, social and economic life in the region, which had sprung to life with the reconciliation process, has been replaced with an atmosphere engulfed with terror.

The PKK terrorist organization continues to cripple social and economic life as well as harm historical sites in the southeast, terrorizing people by digging ditches and blockading roads, causing them to leave their homes. On Monday, the PKK began targeting cultural heritage sites, torching a centuries-old mosque in Diyarbakır. Fatihpaşa Mosque, a 16th century mosque in Sur, was attacked by members of the PKK, which also blocked firefighters from accessing the blaze. The fire gutted most parts of the mosque, which was the first Ottoman landmark in the city.

The PKK had shown its desire for autonomy in the region through proclaiming self-determination in several places. However, these attempts were not met with approval from many of the locals. And particularly in provinces where there have been claims of self-rule, security forces have intensified operations and dealt a major blow to the PKK.

Previously, it was also reported that the popularity of the PKK and YDG-H among locals has significantly decreased due to the ongoing war with security forces. The PKK has purportedly marked houses belonging to families who are known to oppose the PKK's life-crippling policies of digging ditches, barricading roads and clashing with security forces in order to pressure them to leave.

Thousands of people have become unemployed, since many workplaces and construction sites have been closed due to concerns of terrorism. People in the region currently have difficulty going out for bread and want a return to the peace that was prevalent as a result of the reconciliation process between the state and the PKK. The people are demanding the PKK disarm and return to the reconciliation process for a permanent solution to the decades-long conflict. In metropolises, where the influence of terror is felt less, such as Şanlıurfa, Mardin and Gaziantep, tourism, which constitutes the heart of the region's economy, has nearly ground to a halt. After the suicide bombing in Suruç on July 20, which killed 33 people and left more than 100 injured, GAP tours, which are organized in the cities of the region and normally cater to millions of tourists a year, have been canceled. While Gaziantep's Bakırcılar Çarşısı (Coppersmiths Bazaar) is experiencing its emptiest days in recent years, it is not possible to see any domestic or foreign tourists at Balıklı Lake in Şanlıurfa, which normally attracts many visitors each season. The situation is the same in Mardin, a city that has been home to many different cultures over the millennia, is left with empty hotels.

Regarding the problems, GAP Administration head Sadrettin Karahocagil previously said that there has been a great decrease in the number of tourists visiting the region. "April and May passed without any problem. [Tourists] were pouring into the region. Problems started in June. This is a perception problem that we cannot change," he said.

The PKK was formed in 1978 and is recognized as a terrorist organization by the U.S., EU and Turkey.
RELATED TOPICS