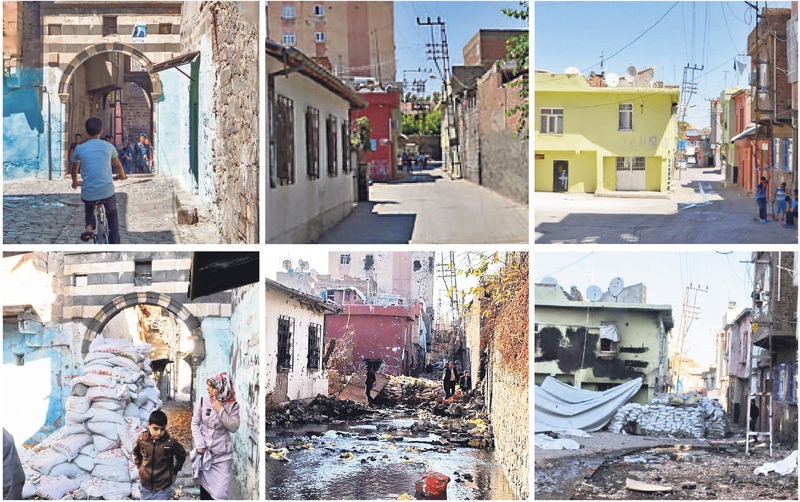 Security forces are determined to wipe out all terror elements in urban areas with locals expressing their fury over recent attacks on historic sites and mosques as well as ditches dug by terrorists. Curfews have been imposed in several districts in the southeast to prevent civilian casualties

With the PKK terrorist organization and its urban branch, Patriotic Revolutionary Youth Movement (YDG-H), taking violence to cities and crippling daily life by forcing people to leave their homes, special operation units will be joined by the military to launch extensive operations against all urban terror elements. Prime Minister Ahmet Davutoğlu acknowledged that curfews do affect people's lives but the state has to take measures to prevent civilian casualties. "We're conducting the most successful operation of the last 30 years," he said, adding that the PKK is attempting to turn the southeast into a place like Syria's Kobani, which faced fierce clashes between PKK-linked groups and DAESH.

On Sunday, thousands of teachers in the Cizre and Silopi districts of the southeastern Şırnak province received text messages with instructions to attend seminars in their respective hometowns. The instructions, however, were interpreted as being based on a threat to the teachers by the PKK. Curfews were imposed on Monday in both districts, going into effect at 11 p.m.

In the city of Mardin, the Nusaybin district has also been profoundly affected by the terror of the PKK. Having endured six curfews over the course of the past two-and-a-half months, locals in the district have started to make their way to other cities. Inundated by ditches dug by terrorists, locals are desperate to find breathing space. A new curfew was imposed on Monday in the district going into effect at 4:00 p.m.Diyarbakır's Sur district has seen the same fate, so far. Last week, the terrorist organization burned a historic mosque in the Sur district. Later on, terrorists opened fire on firefighters and policemen who tried to put out the blaze. Burned Qurans were also found inside the mosque. Locals expressed their fury regarding the attack and called for an end to the violence. Sur has also been under curfew.

On Sunday, the YDG-H announced that the so-called resistance will continue and ditches will not be closed. The PKK's acting leader, Cemil Bayık, also made it publicly known in late November that the PKK will wage a tough war against the Turkish state in the winter. The recent attacks on mosques and the continuous digging of ditches in the streets have been the final straws in the eyes of the public.

On Sunday, some shopkeepers in the Sur district protested the digging of ditches, stressing that they are siding with security forces. Speaking to the state-run Anadolu news agency, shopkeeper Mehmet Özdemir said that he has suffered a loss of around TL 300,000 ($100,000) in the last 10 days. "It is the ditches that started this environment of chaos. The shopkeepers of Sur oppose the ditches. We definitely do not want ditches," he argued.

With one curfew being imposed after another, security forces aim to cleanse urban areas of terrorists and create a peaceful environment for the locals. This strategy is also designed to prevent civilian casualties.

Speaking to Daily Sabah on the issue, Ahmet Taşgetiren, a columnist for the Star daily, said locals in the region are being held captive by the PKK and the terrorists are enforcing somewhat of a state of emergency. "It is a mistake that they have continued to this point. It [the region] needs to be saved. This is an urgent duty of the state. We are where words fail," Taşgetiren argued.

Underscoring that people should be saved from the hands of the PKK, Taşgetiren asserted that operations are being carried out meticulously with curfews.

İlhami Işık, a writer renowned for his views on the Kurdish issue, spoke to Daily Sabah as well, arguing that the picture is quite clear and obvious. "The state gave the people a tough time in the 1990s and the PKK wants to go back to those times. Yet, the difference is that the state had all kinds of opportunities back then. The PKK does not have such a chance or power," Işık contended.

Claiming that the PKK chooses the poorest neighborhoods to implant its ditches, Işık pointed to two reasons. "Firstly, they choose poor districts where people experienced sorrow caused by the state in 1990s. Secondly, they choose environments where there are deplorable living conditions, poverty and people who are in a crisis of identity," he argued.

"This cannot be sustained by the PKK. Even the poor say no to it and migrate. Locals do not answer the PKK's calls," he added.

Also speaking to Daily Sabah, Kurdish intellectual and author Vahdettin İnce expressed his confusion with regards to the PKK's way of thinking. "The PKK damages people when it claims to be saving society and protecting the rights of people. They displace Kurds with ditches," İnce said.

İnce also stressed that the PKK targets poor neighborhoods while districts where rich Kurds live are not affected. "They damage urban areas along with the sociology of the Kurds and then blame it on the state. It is called mocking people," he argued. He also asked why there are no operations in places where the PKK does not carry out terrorist activities.

Underlining that house prices have fallen quite sharply since the incidents occurred, İnce questioned who takes advantage of this. "Kurds do not benefit from it. There is a hidden agenda," he added.
RELATED TOPICS