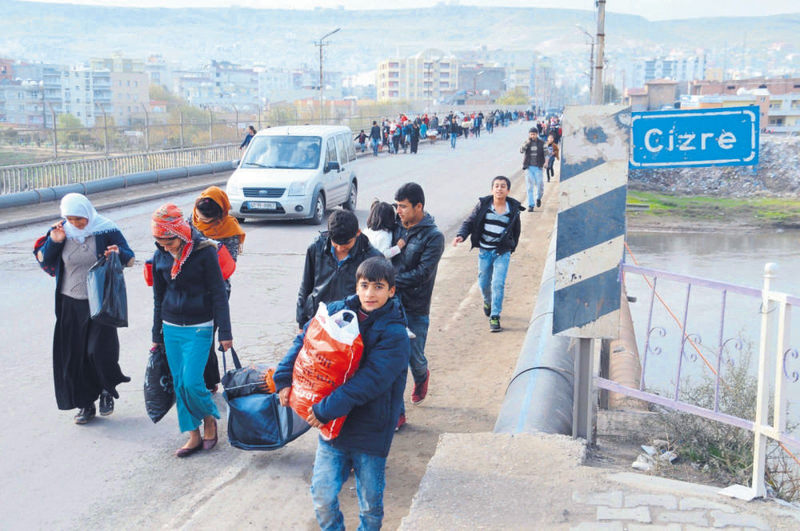 Successfully overcoming PKK terror in the mountains in the southeastern, security forces will now cleanse each neighborhood of every district of terrorists. Meanwhile, locals flee war-torn districts leaving their homes behind despite threats from the PKK

Having taken full control of the mountains in the southeast, a comprehensive operation to sweep the PKK out of several districts where terrorists are crippling social life and economic activities was launched late Monday by security forces. People are desperate to flee the districts while the PKK struggles to rally local support. Operations are being carried out especially in districts where terrorists are dominant, such as Silopi, Cizre, Nusaybin, Yüksekova, Silvan and Dargeçit. Security forces reportedly surrounded the exits of these districts and the military, including special operations forces from the gendarmerie and local police departments, will take the initiative to purge terrorists from the areas. On Sunday, thousands of teachers in the Cizre and Silopi districts of Turkey's southeastern Şırnak province received text messages with instructions to attend seminars in their respective hometowns. The instructions, however, were interpreted by teachers affiliated with the PKK as being based on a threat. Curfews were imposed on Monday in both districts, going into effect at 11 p.m. The Nusaybin district of Mardin province has also been profoundly affected by PKK terrorism.

Having endured six curfews over the past two-and-a-half months, locals in the district have started moving to other cities. Inundated by the ditches being dug by terrorists, locals are desperate to find breathing space. A new curfew was imposed on Monday in the district which goes into effect at 4:00 p.m.

While people are forced to migrate and leave their homes behind, the PKK terrorists try to do their best to prevent people from fleeing the war-like zone. Blocking the roads, terrorists also reportedly open fire on civilian vehicles. Criticized for remaining silent while the PKK continues to dig ditches and cripple daily life, Istanbul deputy of the Peoples' Democratic Party (HDP) posted a threat on her official Twitter account directed at citizens trying to flee their districts. Pervin Buldan said: "You shall not give up and leave. You shall not quit. You may not be welcome when you want to go back one day."

Speaking to reporters ahead of his visit to Bulgaria, Prime Minister Ahmet Davutoğlu highlighted that they will not give these terrorists a single chance in Cizre and Silopi, vowing that "They [the PKK] have been involved in the activities of digging ditches, laying mines and using schools as bases for clashes. The terrorists' killings of people in any way will be not allowed."

Adding that security forces have purged terrorists from the region after taking control of mountainous areas in Hakkari's Dağlıca district, Davutoğlu said they will make national stability a constant.

In a televised interview with A Haber on Monday, Davutoğlu also acknowledged that, while curfews do affect people's lives, the state has to take preventative measures and minimize civilian casualties. "We're conducting the most successful operation of the last 30 years," he said, adding that the PKK is attempting to turn the southeast into a place like Syria's Kobani, where civilians faced fierce clashes between PKK-linked groups and DAESH.

The Turkish government has intensified its counterterror operations following the recent attacks carried out by the PKK, which is recognized as a terrorist organization by the U.S., EU and Turkey.

İlhami Işık, a writer renowned for his views on the Kurdish issue, spoke to Daily Sabah and accused the PKK of targeting economically disadvantaged Kurds rather than well off ones. "Firstly, they choose poor districts where people have experienced sorrow caused by the state since the 1990s. Secondly, they choose environments where there are deplorable living conditions, poverty and people who are in a crisis of identity," he argued.

Also speaking to Daily Sabah, Kurdish intellectual and renowned author, Vahdettin İnce, expressed his confusion regarding the PKK's way of thinking. "The PKK damages people when it claims to be saving society and protecting the rights of people. They displace Kurds [by digging] ditches," İnce said.

İnce also stressed that the PKK targets poor neighborhoods while districts where rich Kurds live are not affected. "They damage urban areas along with the sociology of the Kurds and then blame it on the state. It is called mocking people," he argued.

PKK terrorism in various southeastern provinces continues to interfere with daily life, including education, as many teachers have fled schools in the region, leaving students behind.

On Sunday, thousands of teachers in the Cizre and Silopi districts of the southeastern Şırnak province received text messages with instructions to attend seminars in their respective hometowns. The instructions, however, were interpreted as a threat to the teachers by the PKK. A teacher of religious culture and moral knowledge said: "We were going to school and home together with the children. Our students were becoming shields for us."

A Turkish language teacher from Silopi said: "We left after packing. Terrorists pointed their guns at us in the bus terminal and said 'You will return.' Members of the Patriotic Revolutionary Youth Movement (YDG-H) came in front of us. I said 'My wife is pregnant' and we shook them off."