PKK unravels as terrorists attempt to flee battles in southeast 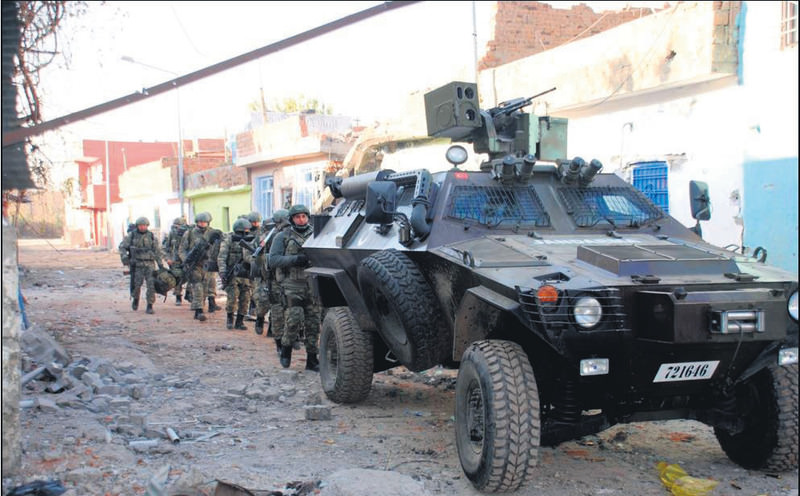 Security forces during an operation in the Sur district of Diyarbaku0131r province.
by Daily Sabah Dec 22, 2015 12:00 am

PKK terrorists, who have taken violence to urban areas, turning them into war zones, are reportedly looking for a way out of the battle as security forces intensify their operations especially in Cizre, Silopi and Sur districts

As special operations units along with troops continue to clamp down on the PKK and its urban branch as part of the most extensive operation in recent years, terrorists are reportedly seeking ways to flee battle zones disguised as civilians.

Amid intense operations underway in different districts in the southeastern provinces of Diyarbakır, Mardin and Şırnak that have left at least 128 terrorists dead, 40 militants who wanted to escape the battle have reportedly been executed by the PKK. A terrorist in charge of the Cizre district has also been on the run, according to reports in the Turkish media.While the unraveling inside the PKK appears to deepen as operations intensify, intercepted radio conversations of PKK leader Murat Karayılan reveal the trouble the PKK currently finds itself in. According to reports in the media, the PKK is in a state of panic and now targets hospitals, schools and houses.

In the wake of such reports, a handmade explosive was found on Monday in the yard of a nursery school in Şırnak. As security officers arrived at the scene upon notice, terrorists opened fire on them without taking children into consideration.

Aside from ignoring children and civilians, the PKK seems to be willing to sacrifice its own militants either. In another intercepted radio conversation, terrorists are given an order to blow themselves up to cause harm to security forces. At midnight on Dec. 16, a terrorist said on the radio: "Then go blow yourselves up. You will already die, at least make yourselves damn useful."

Meanwhile, photos taken during an operation in the Sur district of Diyarbakır were released to media outlets on Monday. Terrorists used schools as bases and set them on fire before leaving. In addition, many explosives and hand grenades were found in the operations and destroyed.

Eighty-seven terrorists have been killed in extensive operations in the Cizre and Silopi districts of Şırnak province where the organization is dominant. Heading into the seventh day of the operations, security forces also killed 80 people in Cizre, seven in Silopi and captured 10 alive.

With the aim of cleansing each neighborhood of terror elements, security forces have also destroyed 85 barricades and 13 handmade explosives. Some 649 apartments have been searched in both districts. Twenty-three security forces personnel have been injured in the operations.
Last Update: Dec 22, 2015 11:47 am
RELATED TOPICS