PM Davutoğlu: Gov't determined to clear out PKK, no bargaining with terrorists 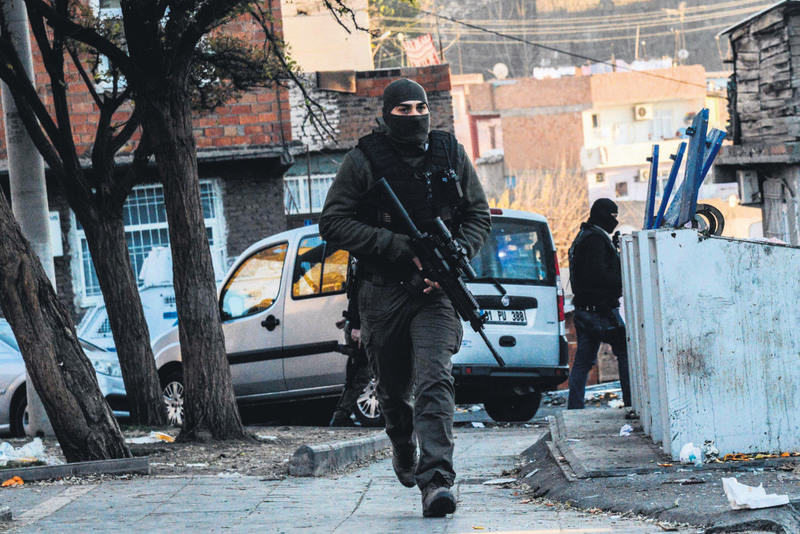 PM Davutoğlu said the anti-PKK operations will continue until all PKK elements are cleared out and that the government will not bargain with the terrorist organization. He also touched on talks with Israel and Russia's aggressive attitude toward Ankara

Prime Minister Ahmet Davutoğlu stated that the government will continue military operations against the PKK terrorist organization until all the ditches and barricades set by PKK's urban wing are removed in southeast Turkey.

"Our priority is to clear all the neighborhoods, streets and cities of terrorist activities. Order will be restored and we will not go into negotiations on this issue with anyone," he added.

Davutoğlu harshly criticized the pro-Kurdish Peoples' Democratic Party (HDP) for siding with PKK terrorists, who he said were responsible for attacks against civilians in Turkey's southeast. He added that the HDP must change its hostile attitude, be sincere and show that they are a political party of Turkey.

PM Davutoğlu underscored the importance of a mutual agreement and dialogue between political parties to draft a new constitution shortly after the meeting was held with the main opposition Republican People's Party (CHP).

Speaking at a live television broadcast on NTV, Davutoğlu said that there is a misperception in Turkey that portrays political parties as enemies, and obliges political leaders to use harsh language against each other.

"CHP chairman Kemal Kılıçdaroğlu and me are political opponents, not enemies," Davutoğlu said, and added that political opponents must criticize each other in a civilized manner when necessary, support one another, not be afraid to say "you are right" sometimes and must avoid seeing each other as enemies.

He said that Wednesday's meeting with the main opposition was critical, as it has the potential to start a new tradition between political parties, and that it will benefit the country, as the ruling party will have the chance to discuss and share their four-year vision. Davutoğlu noted that such a tradition will ultimately ease tensions between different political parties, as well as their supporters.

Davutoğlu also noted that the meeting took place in a welcoming atmosphere, despite differences of opinion between the two parties on a number of factors, including the presidential system. He added that he would have still held the same meeting if the Justice and Development Party (AK Party) had enough seats to make a constitutional amendment in Parliament, to ensure that a mutual agreement is reached within a democratic framework.

The prime minister said that it was important for the new constitution to be based on a "timeless spirit," which would not be limited to the current conjuncture.

"So let us not personalize the constitution," he said, adding that the constitution should be made in such a way that it will still be appropriate after 40 years, and underscored that both parties are in favor of a new, more democratic constitution.

Davutoğlu defined the anticipated constitution as one with no limitations on basic rights and freedoms, which prevents monopolization of power in a single actor. He said that such constitution would recognize the people as the only legitimate source of power, and that no mechanism without the approval of the people would gain legitimacy.

"The state should not define us, we [the citizens] should define the state," Davutoğlu said, highlighting the importance of discussing a new system of governance in Turkey, while urging everyone to "put their taboos aside" regarding the presidential system and focus on finding the "right one."

He said that the presidential system is more suitable for checks and balances and that the prime minister has more power in the parliamentary system.

Davutoğlu continued by saying that it is necessary for the Parliamentary Constitution Conciliation Commission to continue their work from where it was left off, and that everyone – including political parties, and the people – must take on responsibility.

"The nation told the AK Party that they entrust us with the administration of the government, because they trusted us, but they did not tell us that they give us the authority to draft a new constitution, and rather said that we must draft it through conciliation," Davutoğlu said, and added that all spheres from society must put pressure on political parties to free them from the chains of the Sept. 12 coup constitution.

Touching upon the crisis in Syria and Russian airstrikes, Davutoğlu said that Russia and the Assad regime benefit the most from Daesh's existence, as the terrorist organization provides legitimacy for them.

"Russian airstrikes against moderate opposition provide a safe zone for Daesh terrorists," Davutoğlu said, and reiterated once again that Turkey will not apologize to Russia for protecting its airspace and sovereignty, underscoring that Russian sanctions against Turkey will not only harm Turkey, but will also have consequences for Russia.

He also noted that the elimination of Daesh would disturb the PKK terrorist organization and its Syrian affiliate Democratic Union Party (PYD), as they receive arms from some countries under the name of "fighting Daesh."

Ankara negotiating with Israel to lift blockade on Gaza

Regarding the normalization of relations between Turkey and Israel, Davutoğlu said that they have come to an agreement over compensation, and that they are currently negotiating lifting the blockade over Gaza.

Davutoğlu also talked about the deployment of Turkish troops in Northern Iraq, which led to an increase in tensions between Iraq and Turkey, with Bagdad threatening military action against Turkey.

"The duty of troops deployed at Camp Bashiqa is to protect those training fighters against Daesh," Davutoğlu said, and he continued by adding that the decision regarding withdrawal of Turkish troops from Iraq will be made in accordance with military needs.

He added that Iraq should use its military power against Daesh terrorists if it is able to do so, rather than on Turkish troops who are there for training purposes.
RELATED TOPICS