HDP's pro-PKK policies cause decline in votes from elite circles 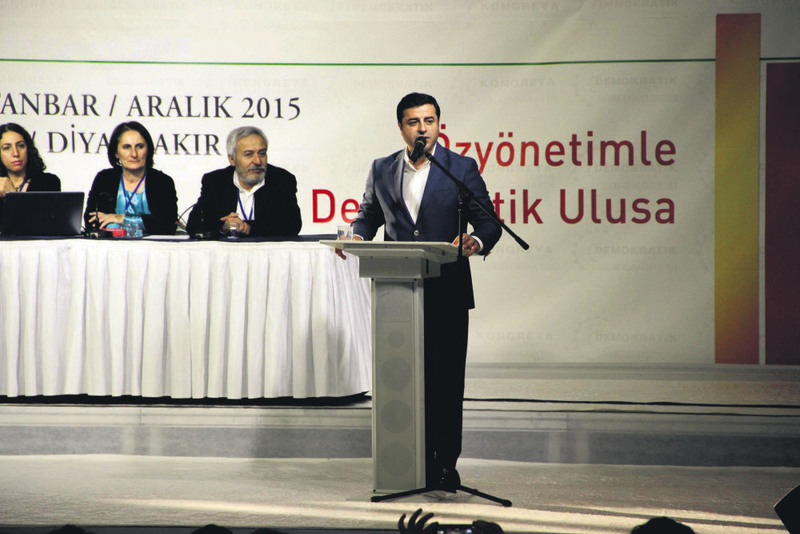 HDP Co-Chair Demirtau015f speaking at the controversial Democratic Society Congress (DTK) on Dec. 27 where a call for autonomy in the southeast was made.
by daily sabah Jan 04, 2016 12:00 am

The HDP's pro-PKK policies and contradictory stance on being a party of Turkey in comparison to before the elections have caused a dramatic drop in support from elite circles, a recent survey found

As the Peoples' Democratic Party (HDP) is being criticized for its connections to the PKK, a recent survey conducted by the Ankara-based Objective Research Center (ORC) published on Saturday revealed that the HDP has lost significant support. Only 6.5 percent participants indicated that they would vote for the party if there were an election held today. The survey was conducted in affluent Istanbul neighborhoods such as Etiler, Bebek, Nişantaşı and Cihangir, which supported the HDP in the past elections. Residents of these neighborhoods indicated their regret for supporting the party as more than 60 percent of participants ascribed their disappointment to the HDP supporting the PKK. The ORC conducted a face-to-face survey with 920 people in four neighborhoods of Istanbul between Dec. 19 and Dec. 30, revealing the decline in support for the HDP.

The HDP presented itself as a party that would unite Turkey, but its reluctance to reprimand the terrorist organization PKK and the recent call for self-rule from the party's Co-Chair Selahattin Demirtaş are interpreted by many as signs that the party is no longer a party for all of Turkey.

The HDP appears to have damaged its image in some Turkish news outlets as well. Columnists for Hürriyet daily, who allegedly backed the HDP in the June 7 and Nov. 1 elections and bolstered the image of Demirtaş, were critical of Sunday's congress and the HDP.

Ahmet Hakan, a columnist for the Hürriyet daily, acknowledged that he had been deceived by Demirtaş's statements and stance before the elections. Ertuğrul Özkök, the former editor-in-chief of the daily, also shared his dissatisfaction with the party and its pro-PKK policies, saying: "You [addressing Demirtaş] disappointed us. We do not call you a traitor. However, you shall know that we have been betrayed."

Having stunned the country by securing 80 seats with more than 13 percent of the vote in the June 7 elections, the pro-Kurdish HDP had barely passed the 10 percent national election threshold on Nov. 1, losing 21 seats in Parliament.

It remains unknown whether the HDP will change its political strategy having seen a dramatic drop in its votes. After emboldening its party grassroots and seeing elite circles join the cause of the party, the HDP now is faced with the threat of losing almost all of its support.
RELATED TOPICS