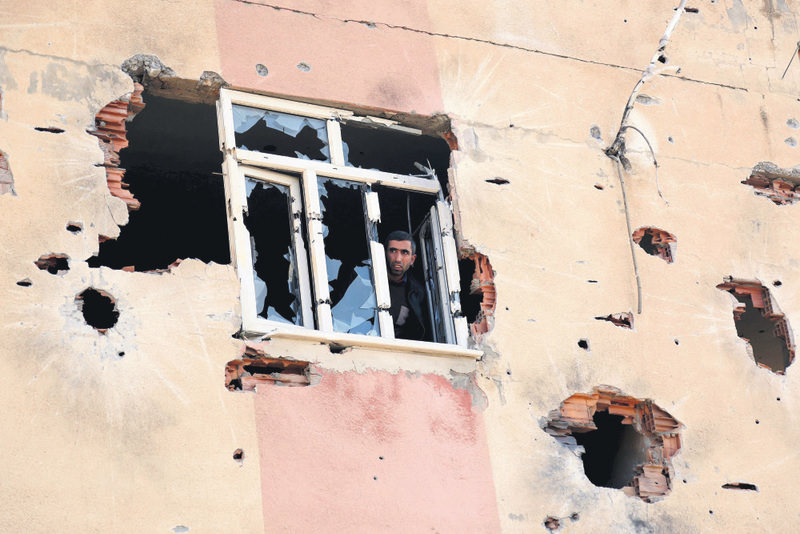 A local resident looks from a window of a house that was used by PKK terrorists in the Sur district of Diyarbaku0131r. (Reuters Photo)
by Daily Sabah Jan 05, 2016 12:00 am

Photos released by the General Staff show the PKK using strategies that were used in the fight against DAESH in Kobani. Local residents' homes are forcibly used as a shield to fight security forces in districts with curfews imposed

As security forces continue to crack down on the PKK terrorist organization and its urban youth branch in the southeast, photos released by the General Staff show the PKK using strategies from the battle to defend the Syrian town of Kobani from DAESH. According to reports in the Turkish media, terrorists are drilling tiny holes in walls through which they open fire on security forces, minimizing the risk of being exposed. The same strategy was previously used by the PKK-affiliated Democratic Union Party's (PYD) armed People's Protection Unit (YPG) in Kobani. The PKK sets houses on fire, sets up barricades and digs trenches in the streets and uses buildings and houses to its advantage, connecting the structures from the inside, according to photos.

Terrorists also prevent unmanned military aircraft from recording images by setting up large awnings in the streets to obstruct the view.

The government has adopted a new strategy in the fight against the PKK to combat these new tactics. While the PKK is spilling its war tactics into urban areas, the government is changing tactics as well. Government officials have revealed that security forces are launching counterterror operations to meticulously rid neighborhoods of terrorists.

As security forces intensify operations, partial curfews are being imposed in order to minimize civilian casualties. The plan includes launching operations during curfew hours when civilians are at home and at less risk. The new strategy has particularly been employed in provinces close to the Syrian, Iraqi and Iranian borders. With the death toll in urban areas reaching 269 since the beginning of the operations in mid-December, the government still vows to continue the operations until the very end.

PKK terrorists on Sunday opened fire on three civilians trying to flee the region following clashes as part of counterterror operations in the Silopi district of Şırnak province. The attack left one dead and wounded two others.

The PKK also previously tried to prevent people from fleeing the region by opening fire on them.

On Dec. 17, PKK terrorists in the Cizre district of Şırnak stopped a car that was carrying several locals fleeing the region and opened fire. The attack claimed the life of a 15-year-old girl.

Terrorists also opened fire on some 300 local residents on Dec. 22 with rifles and rocket launchers in the same province. Residents were reportedly trying to flee the region when they were attacked. Security forces intervened and sheltered locals inside of a gym, media outlets reported.

As part of the PKK's new strategy, terrorists are launching attacks on historic sites, civilian homes, hospitals and schools.

On Dec. 25 the PKK attacked a cultural center and library in Şırnak with handmade explosives and Molotov cocktails, while many civilians including children were inside the building. The attack left four children and two others wounded.

Prime Minister Ahmet Davutoğlu has recently stated that the government will continue military operations against the PKK terrorist organization until all the ditches and barricades set by PKK's urban wing are removed in southeast Turkey. "Our priority is to clear all the neighborhoods, streets and cities of terrorist activities. Order will be restored and we will not go into negotiations on this issue with anyone," he added.

Davutoğlu harshly criticized the pro-Kurdish Peoples' Democratic Party (HDP) for siding with PKK terrorists, who he said were responsible for attacks against civilians in Turkey's southeast. He added that the HDP must change its hostile attitude, be sincere and show that they are a political party of Turkey.

A recent survey conducted by the Ankara-based Objective Research Center (ORC) published on Saturday revealed that the HDP has lost significant support. Only 6.5 percent participants indicated that they would vote for the party if there were an election held today. The survey was conducted in affluent Istanbul neighborhoods such as Etiler, Bebek, Nişantaşı and Cihangir, which supported the HDP in the past elections. Residents of these neighborhoods indicated their regret for supporting the party as more than 60 percent of participants ascribed their disappointment to the HDP supporting the PKK. The ORC conducted a face-to-face survey with 920 people in four neighborhoods of Istanbul between Dec. 19 and Dec. 30, revealing the decline in support for the HDP.

When asked which party they voted for in the Nov. 1 elections, 12 percent of the participants said the HDP; however, when the participants were asked which party they would vote in a new election, only 6.5 percent indicated the HDP.The HDP presented itself as a party that would unite Turkey, but its reluctance to reprimand the terrorist organization PKK and the recent call for self-rule from the party's Co-Chair Selahattin Demirtaş are interpreted by many as signs that the party is no longer a party for all of Turkey.
RELATED TOPICS