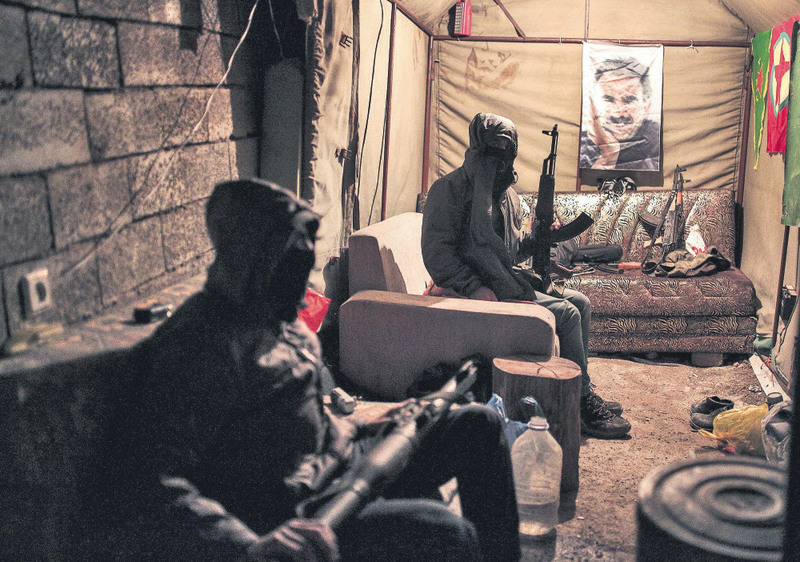 After losing popularity for the PKK's new strategy of shifting its fight to urban areas, the pro-Kurdish HDP is now trying to set a new agenda with rumors over PKK leader Öcalan's imprisonment and health conditions

Amid debates over whether the immunity of Peoples' Democratic Party (HDP) deputies should be lifted, HDP Ankara Deputy Sırrı Süreyya Önder threatened Turkey with war on the grounds of concerns with the security and health of imprisoned PKK leader Abdullah Öcalan at a press conference in Parliament on Thursday. HDP Parliamentary Deputy Speaker Pervin Buldan and Group Deputy Chairman İdris Baluken were also present at the press conference.

"Imposing isolation on Öcalan and making his people, as well as his organization, worry about his security and health mean an invitation to war," Önder said. He claimed that two prisoners staying with Öcalan have been recently relocated and are currently not in İmralı prison.

Önder further alleged that the pro-Kurdish party has not been informed about the health condition of Öcalan, calling on the government to make an urgent statement. "The public should be informed urgently and transparently on this issue," Önder said, adding that the issue cannot be taken lightly.

The controversial statement has been interpreted by some as a sign of refocusing on Öcalan. PKK leader Cemil Bayık, who was interviewed by BBC Turkey on Nov. 30, completely ruled out any possibility for Öcalan to make decisions from İmralı, where he "is being held captive by the Turkish state." In the interview, Bayık also said: "Our movement [the PKK] has no relation to the leader Apo."

Having failed to obtain the support of Kurdish people in the southeast to cause an uprising, the PKK may now be playing the Öcalan card. The HDP has recently come under fire for its pro-PKK policies and has been accused of being a political extension of the terrorist organization. Thursday's statement has been interpreted by analysts as the PKK's change of tactics to include Öcalan back into the plan. It remains a mystery whether the PKK's second attempt, this time through Öcalan, to make Kurds in the region revolt against the state and security forces will succeed.

Speaking to Daily Sabah on the subject, Kurtuluş Tayiz, a columnist for the Akşam daily, recalled Öcalan's words before the reconciliation process started: "If the reconciliation process fails, consider me dead." Underscoring that it was a warning sign to the HDP and Qandil for them to be more cautious and responsible, Tayiz contended that the party and the PKK are now trying to compensate for their failure to create a revolutionary people's war by presenting Öcalan as a savior.

"Öcalan called on the PKK to disarm and leave the country in 2013 and 2014. However, the PKK did not obey him. The revolutionary people's war resulted in a fiasco. The HDP and PKK now request a restart of the dialogue to get out of the slump by using the Öcalan card," Tayiz argued.

When asked about whether Öcalan will eat his words and return to the table for the sake of the HDP and PKK, Tayiz asserted that it all comes down to the Turkish state to restart the reconciliation process or not. "Öcalan has been keeping silent over the developments because there is nothing he can do," he added.

Yeni Yüzyıl University's vice dean and academic in the Department of International Relations, Professor Yaşar Hacısalihoğlu also spoke to Daily Sabah on the issue and asserted that the joint plan of the HDP, PKK and PYD to use the Öcalan card will eventually fail. "The PKK, HDP and PYD, which in my opinion are intertwined, have tried to spread a smear campaign that the Turkish state tyrannizes its people like it did in the 1990s. They tried to turn the people against the state, which they failed to do," Hacısalihoğlu argued, adding that the three have tried to start a civil war.

Stressing that the trio now uses Öcalan as a political weapon following attempts at Washington, Tehran and Moscow, Hacısalihoğlu said: "It will not succeed. They will now ease their statements on Öcalan and make a play by way of him. However, the people will take it into consideration and see the truth."

İlhami Işık, a Kurdish writer renowned for his views on the Kurdish issue, spoke to Daily Sabah and downplayed the HDP deputies who made the statement, saying, "Baluken, Önder and Buldan are not political actors and their words are not worthy of anything. It would be worth discussing had Bayık said these things." Işık also labeled the statement an expression of "inaptitude and not being able to say no to the PKK's violence."

Claiming that the HDP is now attempting to hide its collapsed strategy and failure to stand against violence in the region by way of Öcalan, Işık said: "Their nuisance is not about Öcalan's health condition at all. It is a tactic of their own, and it is baseless."
RELATED TOPICS