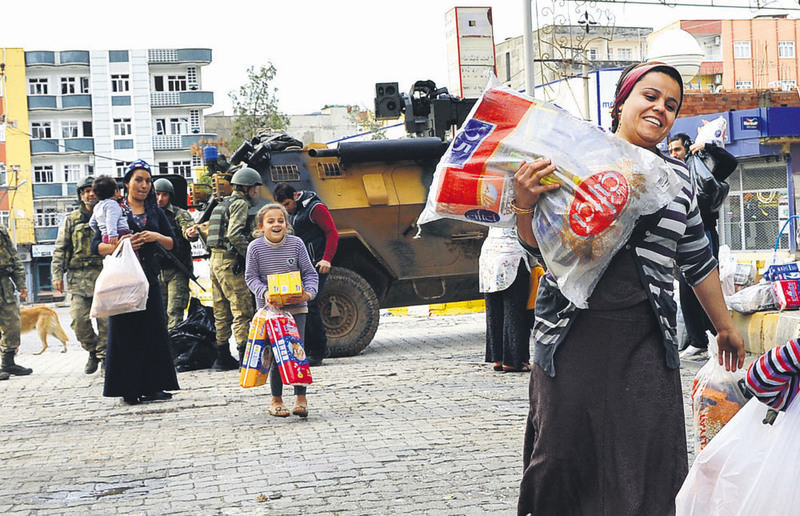 Military officials distributed packages of food and household goods to residents of the Silopi district of u015eu0131rnak province on Tuesday.
by Yunus Paksoy Jan 13, 2016 12:00 am

As the end of extensive operations in the southeast nears with security forces cracking down heavily on the PKK's urban branch, the government's post-operations plan is already on the table

Amid debates over how the government's plan will re-establish public order and facilitate quality of life for the people in the region, Interior Minister Efkan Ala said that an effective plan will be launched once the ditches have been filled. The fight against terror will continue after ground operations end, as well. The Family and Social Policies Ministry, National Education Ministry and Youth and Sports Ministry will reportedly join forces with universities and nongovernmental organizations for various projects to revitalize the entire region and prevent the creation of an environment that fosters terrorism.

As counterterror operations continue in the southeast, PKK terrorists have been eradicated from the Silopi district of Şırnak province, according to a statement given by a wounded special operations officer receiving treatment in the province of Samsun on Monday.

Mustafa Kemal Hançer was wounded in a PKK bomb attack in Silopi before being transferred to Samsun for treatment, where he said that the district is now free of terrorists. Asserting that security forces are exhausting every effort to re-establish public order in the region, Hançer said that meticulous operations are being carried out there.

In a coordinated effort with the police, the Turkish Armed Forces (TSK) launched its most extensive operation in the region in mid-December of last year and 483 terrorists have been killed since operations began, according to a written statement released by the TSK on Tuesday.

Reports of intense clashes between security forces and the PKK continue to come out of the region, with videos released from the districts showing terrorists trapped in buildings and houses where they are hunted down by security forces.

Social and economic life in the southeast has been paralyzed by the PKK, as buildings are vandalized, civilians killed and the security of hundreds of people threatened.

Life has become nearly unbearable for the locals who have enough tolerance to stay in the region, as hundreds of thousands of people flee their homes, forced out of conflict-ridden areas.

Despite claims that they are serving the interest of the Kurds in the region, PKK clashes with security forces could pave the way to a drop in local support, as residents want to return to the peaceful atmosphere they experienced during the reconciliation process.

With no regard for the rich historical heritage in the region, terrorists continue to use life-crippling strategies, digging ditches and barricading roads in the region in failed attempts to gain autonomy.

A police officer who was wounded during a security operation in the Cizre district of Şırnak on Tuesday was rushed to a nearby hospital where he died of his injuries, security officials said.

The PKK, which the U.S. and EU consider a terrorist organization, resumed its 30-year armed campaign against the Turkish state in late July after the collapse of a cease-fire agreement.

The PKK has used distorted reports and misinformation to conduct a smear campaign against the counterterror operations. A total of 1,128 academics from Turkish universities and universities abroad have co-signed a declaration that harshly criticizes the government for its operations while not citing the PKK as responsible for the deadly attacks on security forces and civilians.

The PKK smear campaign began with claims circulating that the Turkish state is committing war crimes in the southeast by killing civilians. However, as Prime Minister Davutoğlu said in late December, the PKK is solely responsible for the civilian death toll. A group of academics, the Academics for Peace, openly accused the state of "slaughtering Kurdish people" and "forcing them into exile."

The declaration did not reference the PKK, instead slamming security forces for allegedly "violating human rights." The group also asserted that their efforts in this regard will continue in the international arena, as well.

President Recep Tayyip Erdoğan criticized the declaration on Tuesday, calling it pure ignorance. In his address to ambassadors at the Presidential Palace in Ankara, Erdoğan railed at the academics for accusing the Turkish state of massacring Kurds. "This so-called intelligentsia has unfortunately spoken of the state committing massacres. You are certainly ignorant and in the dark if you do not know where the southeast and east are," Erdoğan contended.

The president also called on foreign academics who co-signed the declaration to visit the region and see the reality for themselves. "Come to Turkey. We are ready to explain by providing proof of what is happening in the southeast and east from A to Z," he said.
RELATED TOPICS