US Ambassador Bass: PKK needs to cease its attacks and needs to stop declaring autonomy 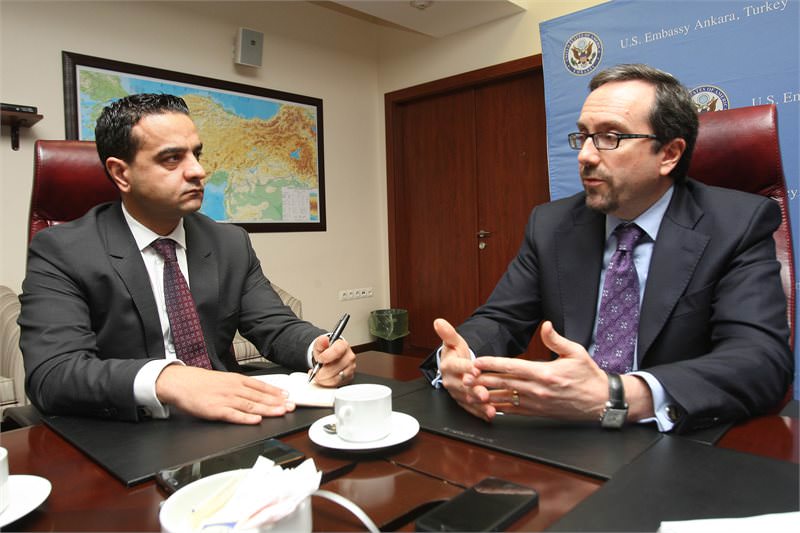 U.S. Ankara envoy Bass said that the terrorist PKK organization should give up policies for autonomy and use of violence and that Washington does not approve of the PKK-affiliated PYD's efforts to form a Kurdish corridor disregarding the demographic structure of northern Syria

A PKK terror attack left six dead, including an infant, and 39 injured in Diyarbakır on Thursday as Turkey continues to mourn the DAESH suicide bombing in Istanbul on Tuesday that claimed the lives of 10 people. Speaking exclusively to Daily Sabah, U.S. Ambassador to Ankara John Bass said the threat posed by terrorism in the region is one of the major challenges that we face together while expressing his deep condolences to everyone in Turkey.

"The PKK needs to cease its attacks and it needs to stop declaring autonomy within zones or neighborhoods or regions inside Turkey. That's an attempt to change political arrangements by force, and that is something we strongly reject," Bass said regarding PKK attacks while defining the resumption of large-scale violence in the southeast as a great tragedy. "We believe strongly that the last thing the wider region needs, the last thing that Turkey needs, is more conflict," he said, and added that security forces that conduct operations should have restraint and be done with precision to avoid killing civilians and impact wider communities and civilians. "We continue to strongly urge both the PKK to stop its attacks and the government to be ready to begin a new, or a resumed, political conversation with people across society about that important political future," Bass said.

Underlining that Turkey and the United States cannot afford to have DAESH present on Turkey's border in the section between Jarabulus and Kilis, Bass said there is an agreement between the two countries, and they want a durable solution to achieve this goal. "From our perspective, that means ensuring that the forces clearing that area are familiar with that area. Some of them may come from that area. But they need to be capable of not simply pushing DAESH out, but then maintaining that area after DAESH is removed," he said to describe what a durable solution would entail.

However, Bass said that it has become more challenging following Russia's intervention in Syria "[b]ecause we have seen some of the forces that might have been able to fight DAESH in that area instead having to focus their energy against addressing attacks from the regime, supported by Russian airstrikes in Idlib." He said that according to their sources on the ground, over 70 percent of Russia's military action has not been directed at DAESH, but at opposition groups or civilians.

As to whether the U.S. shares Turkey's concerns about the establishment of a Kurdish corridor in northern Syria and a potential change in regional demography, Bass said that the U.S. does not support the Democratic Union Party (PYD) or its armed Peoples' Protection Units (YPG) being the force that clears DAESH out of that remaining section of the border, displacing Arab communities in the areas and connecting the areas under its control in northcentral and northeastern Syria. "We believe it is important that those actors and those forces on the ground that are fighting DAESH do not take advantage of the situation to change demography, change administrative boundaries or make other changes to Syria that should properly be decided in a political transition by all of the citizens of Syria. So we don't want to see military facts created on the ground which have a big impact on Syria's future political arrangements," he said, and added that with respect to fighting DAESH, their focus in Syria remains putting as much pressure as possible on its headquarters in Raqqa and disrupting DAESH's ability to move forces between Raqqa and the Turkish border or between Raqqa and Mosul or other areas that are still under its control. "Our work with various Syrian groups that are committed to fighting DAESH is for this purpose and following this principle," he said.

Touching on Ankara's deployment of Turkish soldiers to the Bashiqa camp north of Mosul and recent tension between Ankara and Baghdad, Bass said that Turkey has an important role to play in helping Iraq and the governorate of Nineveh and the Kurdistan Regional Government (KRG) prepare and train the forces necessary for operations in the region to be successful against DAESH. He stressed, however, that the training activities need to be done with the full coordination of and agreement with the Iraqi government. "Whatever training Turkey is doing, whatever training the U.S. is doing, whatever training any country is doing, needs to be fully coordinated with, and approved by, the central government in Baghdad," he said.

'Any political settlement in Syria requires departure of Assad'

In respect to Syria's future and the U.S.'s stance on the implementation of the Vienna Plan, which involves cease-fires between government and opposition forces and talks between the government and the entire range of political opposition groups with the aim of forming a transitional government, Bass said that the U.S.'s approach to the talks in Vienna is guided by some fundamental principles that have not changed throughout their approach to Syria.

"The first principle is that we do not believe there is a military solution to the conflict in Syria, so there has to be a political settlement; there has to be a political transition. The second principle is that we believe that [Syrian president Bashar] Assad has lost all legitimacy to govern or rule Syria and that any successful transition, any political settlement in Syria, requires his departure. The third principle is that the transition from where we are now to that post-Assad future is fundamentally a matter for Syrians to decide, with support from the United States, from Turkey, from a number of other international countries. That's the construct under which we are approaching the upcoming diplomacy in Geneva, which first and foremost is going to be a discussion and hopefully a negotiation between the various parts of Syrian society that need to sit down and work out a political transition and a process," he said.

'Iran would be even more aggressive with nuclear weapons'

Regarding the rising sectarian tension between Saudi Arabia and Iran, Bass said that from the U.S.'s perspective there is already too much conflict and tension in the region, so the U.S. has been encouraging both governments to take steps to reduce the tension that has spiked in the last few weeks. "That doesn't mean that we are not very concerned by the Iranian government's policy choices and its activities in inserting itself into actual or potential conflicts in many of the countries in the Arab world. That is of profound concern to the United States, and something we continue to urge the Iranian government to stop doing and we will continue to work with a range of our partners and allies across the region to address specific threats posed by Iran and its paramilitary activities and the activities of the Revolutionary Guards where those activities present a threat to specific countries," he said.

Concerning whether the nuclear agreement has given too much liberty to Iran, Bass said the region is much better off without Iran continuing to build a nuclear weapons program and that there could be a possibility that Iran would be even more aggressive if it possessed nuclear weapons. "I know there are arguments out there that the deal is going to make the Revolutionary Guards and Iranian foreign policy even more aggressive. I think to an extent that's a false choice and an analysis, and it's important to see the benefits we will all gain from Iran no longer being so close to acquiring nuclear weapons," he added.

'US does not support independence for KRG'

Regarding extradition of U.S.-based fugitive imam Fethullah Gülen, who faces charges of terrorism in Turkey, Bass said that so far they have not been presented with any evidence that Gülen engaged in what would be considered terrorism in the U.S. "Whether some additional information is being presented or a detail is being presented through a formal legal process, I can't comment on. But, in our policy discussions that we engage in regularly with Turkey and many other countries about terrorist organizations, I am not aware of specific evidence that Mr. Gülen is engaged in activities that would fit within our definition of terrorism," he said, and added that the United States government takes any evidence of illegal, criminal and terrorist activity seriously and acts appropriately.

Touching up U.S.-Turkish bilateral relations and a possible meeting between U.S. President Barack Obama and President Recep Tayyip Erdoğan during his visits to Washington for the Nuclear Security Summit in late March, Bass said that at this point it is too early to predict whether there will be a bilateral component to the visit. "Vice President [Joe] Biden will be here next week. And that's just the latest in a series of what have been very important bilateral engagements, and we expect to see a steady tempo of engagements and meetings between seniors in both countries, both governments in the coming year," he said.
Last Update: Jan 15, 2016 9:41 am
RELATED TOPICS