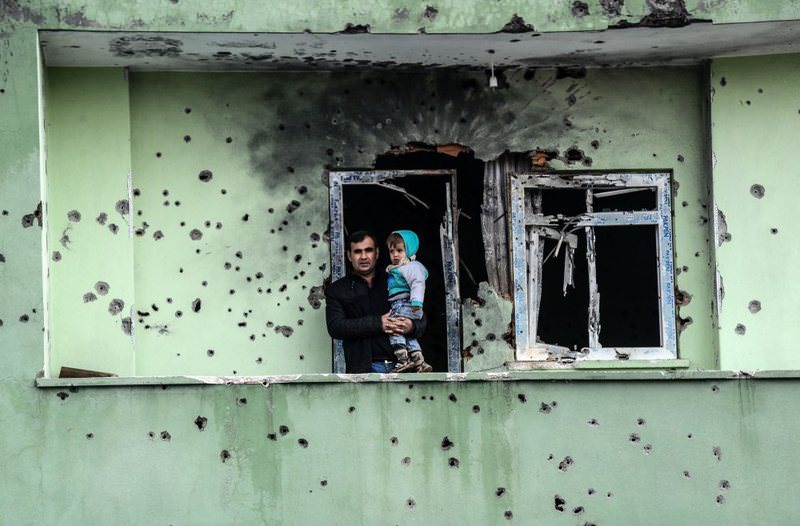 A man holds an infant on the balcony of a damaged house that was used by PKK terrorists in the Silopi district of u015eu0131rnak province.
by Daily Sabah Feb 03, 2016 12:00 am

PM Davutoğlu will reveal the details of the Counterterrorism and Rehabilitation Action Plan during his visit to the eastern province of Mardin on Friday. The comprehensive plan includes security measures and ways to mend social problems caused by recent PKK attacks in the region

The government's newly drafted Counterterrorism and Rehabilitation Action Plan has been drawn up to tackle the regional sociocultural and economic problems raised by PKK terror in southeastern Turkey.

On his visit to eastern Mardin province scheduled for Friday, Prime Minister Ahmet Davutoğlu will reveal the details of the action plan, with a focus not solely on strengthening security measures, but also looking for ways to deal with social problems that have allowed the terrorist organization to seize footholds in the southeast. Municipalities will attempt to determine the needs of the terror-hit areas and draft reports for relevant ministries.

To bolster security in the region, some 4,000 officers – including intelligence and special operations units – will be deployed to the districts which have seen clashes with PKK terrorists. Measures will be taken to prevent the terrorist organization from re-establishing bases in these districts.

PM Davutoğlu hosted a group of NGOs and opinion leaders from southeastern egion of the country on Tuesday and discussed PKK terrorism with his guests and confirmed the action plan will be announced during his Mardin visit.

The Family and Social Policies Ministry is working to determine the problems of those families who have either fled the terror-ridden districts, or are still trying to survive under PKK terrorism. The ministry has already sent extra therapists and social security experts to the region. In the meantime, governorates are distributing aid packages to the people in curfew-imposed districts. Concerning democratization, the government will also introduce economic packages and modifications to meet the needs of people. Along with policies geared towards youth, the plan also identifies steps to be taken by all institutions, including the Health Ministry, National Education Ministry, Environment and Urbanization Ministry as well as Housing and Development Administration of Turkey (TOKİ) and the Presidency of Religious Affairs.

The plan clearly differentiates between combating terrorism and fighting terrorists, as it includes projects to eliminating unemployment as well as housing and social projects. Since all government officials have firmly reiterated re-establishing public order, reports indicate any matters besides those mentioned will not be addressed. The expectations of Kurdish citizens, democratic reforms and human rights actions will be addressed during the discussions on a new constitution.

Underlining that differentiating between terrorist from locals depends on the solid ground of democracy, prime minister stressed that the priorities of the government are educational activities and social support activities, along with city planning. Along with efforts to re-establish public order and sustain unity of the country, Davutoğlu has recently said that he will meet with the locals in the region, to listen and address their problems. "We will leave not one person with tears in their eyes, as we are determined to leave not even one terrorist in the region. Firstly, there should be no one with weapons in their hands who would prevent the living rights of citizens. Without this being addressed, claiming to be an advocate of peace is only a display of bias."

Lack of support from locals had marginalized the PKK, Davutoğlu argued, adding: "Apart from Sur, life is normal in the rest of Diyarbakır. We have isolated them in their rural hideouts. The PKK tried to spread chaos through declarations of autonomy, but failed."

"We are grateful for the support shown to us by the people of the southeast. They [the PKK] failed to instigate mass uprisings." He also said that the PKK tried to exploit the families of the dead terrorists, preventing them from retrieving the bodies while claiming that the state was not giving the bodies to the families. "I issued a governmental decree announcing that anybody not taken by the family within three days would be buried by the state. Since then, they are still trying to exploit the families, but we are doing our best to prevent them."

Davutoğlu said the perfect coordination between the military and local police forces had ensured the success of counterterrorism operations, and added that the government intends to build on this success through spreading peace and prosperity throughout the region. "There is the Nur neighborhood in Cizre, which no security official could enter since the 1980s. There is no such thing now. We will do the same for every neighborhood in the region. We will build new police stations. In certain regions, we will initiate urban transformation if necessary."
Last Update: Feb 03, 2016 11:31 am
RELATED TOPICS