Female deputies take oaths for the first time with headscarves 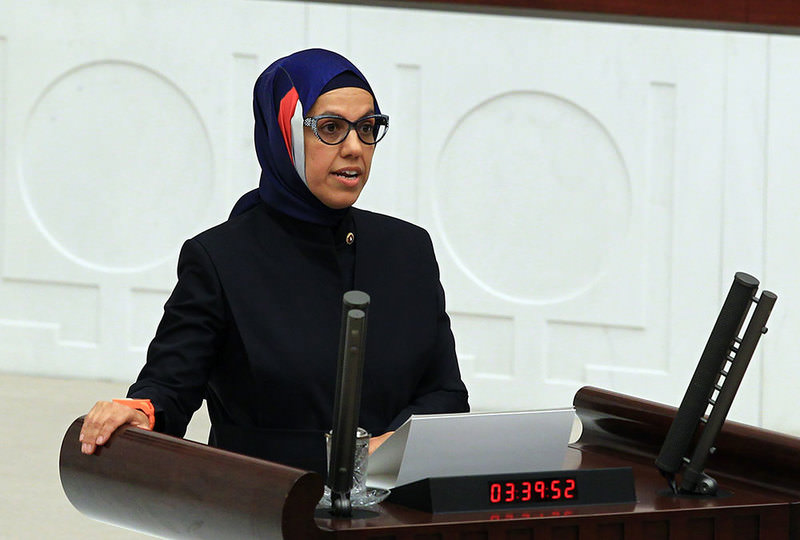 by Daily Sabah Jun 23, 2015 12:00 am
For the first time in Turkey's political history, 21 female deputies took parliamentary oaths while wearing headscarves. 18 of these deputies were elected from the Justice and Development Party (AK Party) lists, while three others were elected from Peoples' Democracy Party (HDP).

Ravza Kavakçı Kan, Justice and Development Party's Istanbul deputy, took her parliamentary oath with the very same headscarf that her older sister Merve Kavakçı was wearing when she was prevented from taking her oath in 1999.

Merve Kavakçı, whose parents were also involved in the struggle for liberalization of headscarves in academics, is an academician who studied in the U.S. due to the headscarf ban in Turkey. She was elected deputy from the Virtue (Fazilet) Party – fourth party of the conservative National Vision movement, predecessor of Felicity (Saadet) and AK Party – in 1999 elections. As she entered plenary session of the parliament to take her oath, deputies from other parties, especially from the Democratic Left Party (DSP), protested her entrance by jeering and hitting at desks, while surrounding the rostrum. Bülent Ecevit, then Prime Minister and DSP Chairman, made an angry speech criticizing Kavakçı, in which he infamously said "Here (the Parliament) is not the place to challenge the state! Please bring this lady into line!"

Kavakçı's move was widely debated at the time as Turkey had recently experienced the post-modern coup of February 28, in which the military forced the conservative Welfare (Refah) Party government to resign by threats of an actual coup and mobilizing Turkey's secular bureaucracy, parties, media groups and NGO's by citing reactionary threat. Although dressing regulations were ambiguous for deputies, wearing headscarves, along with other religious and ideological symbols and facial hair, was banned by the law regulating dressing of public employees.

Kavakçı was subject to a swift political lynching campaign, her citizenship was revoked as she holds American citizenship, thus her parliamentary title was automatically ended, while her parliamentary immunity was also ended. Her house was even raided by public prosecutor Nuh Mete Yüksel in the dead of the night, a move publicly criticized by Ecevit. Kavakçı's move was later used as pretext for banning the Virtue Party by the Constitutional Court in 2001, while Kavakçı was banned from politics for a period of five years.

The ban on wearing headscarves for public employees was lifted in October 2013, with the exception of military, police and judiciary. Four deputies from the AK Party attended parliamentary sessions with their headscarves, thus effectively ending the ban in the Parliament.