Chairman of Const. Comm. in Parliament: AK Party's constitutional proposal may get support even from opposition 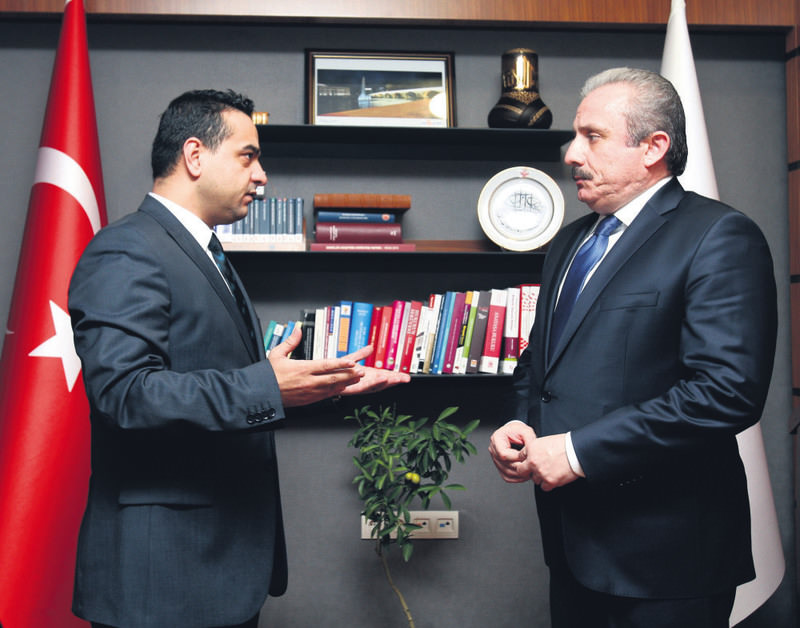 Highlighting that a presidential system does not necessarily pave the way to a federal structure, Chairman of Parliament's Constitution Committee Professor Şentop, said the AK Party's constitutional proposal might be welcomed by the opposition

With representatives from the four parties that have seats in Parliament, the future of the constitutional conciliation committee became uncertain when the CHP, the main opposition party, withdrew from the negotiations. The committee's aim is to replace the 1982 coup Constitution with a civil one.

Daily Sabah spoke with Prof. Dr. Mustafa Şentop, the chairman of the Constitution Committee in Parliament, about discussions for a new constitution, the opposition attitude towards it and the presidential system proposed by the Justice and Development Party (AK Party). Stressing that the presidential system does not foresee any federal structure, Şentop stated that a unitary structure is a must for Turkey.

Şentop said that the proposed presidential system is based on the presidential system of the U.S., while maintaining the unitary structure of the state and the unicameral Parliament. Şentop added that this system would include checks and balances, stating that concerns about authoritarianism are unjustified.

DS: The CHP decided to withdrew from the committee due to discussions about the presidential system. How do you evaluate this action?

The CHP is completely irreconcilable; they see themselves as the privileged party of Turkey and want to make a new constitution according to their will, while they only got 25 percent of the total votes. This is the real issue; the presidential discussions are only the excuse offered to public opinion.

The CHP is proposing a parliamentary system, but not the one we have today; they foresee a change. They want the president to be elected by Parliament, and for the president to have symbolic authority, as foreseen by the 1961 Constitution. Today the president is elected by the people and has more authority. Therefore, when the CHP wants a change in the system, it is just, whereas when the AK Party wants a change, it is unjust. This is one of the impositions by the CHP.

Another reason given for their withdrawal is disagreement on the first three unchangeable articles of the Constitution. However, there is no major divergence in this matter, whereas they make it seem so.

To clarify, the first article, which defines the state's regime as a republic, was already agreed on unanimously during previous sessions. Nobody opposes this, including the Peoples' Democratic Party (HDP). Again there is no opposition regarding the general features of the Republic, which comprises the second article. There are, however, some expressions, which were added by the generals who enacted the coup in 1980, which we believe is not right.

DS: What are those expressions?

Let's read the second article together: "The Republic of Turkey is a democratic, secular and social state governed by the rule of law, within the notions of public peace, national solidarity and justice, respecting human rights, loyal to the nationalism of Atatürk and based on the fundamental tenets set forth in the preamble." For example, it says "respecting human rights." It was expressed as "based on human right" in the 1961 Constitution; thus, in the 1982 Constitution, there is a certain distance implied to human rights. Another example is "notions of public peace." What does it actually mean? We are writing a constitution, not a literary work such as fiction. There are many of these kinds of expressions in the Constitution, which were added by five generals and were previously not included.

Again there is no opposition to the third article, which is about the official language, flag, national anthem and the capital. The issue here is that the CHP are fabricating opposition as an excuse to withdraw from the committee.

DS: What does the road map from here look like? Will the AK Party present its own constitutional proposal to the public?

This committee was one of the ways to make a new constitution; this was the preferred way. It seems the CHP does not want to be part of this way. We have to evaluate whether to continue with the three remaining parties. The HDP shares similar statements as the CHP, yet these statements are not everything. Maybe it can be done with only two parties. We have to evaluate the courses of action we can take. If none of these happen, the AK Party can prepare a draft of the new constitution by themselves.

DS: However, for the new constitution to be ratified, the approval of at least 330 deputies is needed. Do you believe that you can achieve this approval rate?

DS: What are necessities in the constitution?

Two basic principles could be stated. First, the approach to basic rights and freedoms should change. Turkey has to normalize the constitution and make it other than a document representing a particular government. The main source of government is the public. Second, there is a significant need for a change in the system.

DS: Is the presidential debate a debate about Recep Tayyip Erdoğan? What are your thoughts on this subject?

Therefore the discussions about the presidential system are not particular to the AK Party or to Recep Tayyip Erdoğan. This is an issue that has been discussed for 40 or 50 years.

DS: The opposition claims that Erdoğan wants the presidential system for himself. What is your opinion?

We have said that the reason for suggesting a presidential system is due to the inefficiency of the parliamentary system in Turkey, and it has been discussed by many politicians. In this context, if Erdoğan had been the first politician to suggest it, than that would have been correct.

DS: What is the presidential system that the AK Party actually proposes?

We have a concrete and official document about the presidency. It is based on the presidential system of the U.S., as that is the most suitable model for presidential theory. There aren't many differences between both systems, except Turkey would remain a unitary state and maintain its unicameral Parliament. The differences are mostly technical details.

DS: There are claims that the Turkish presidential system would cause authoritarian governance, as it lacks checks and balances. What is your response?

There are two instruments that would comprise checks and balances for the presidential system. The first is the way in which laws are proposed and passed. The president does not have the right to either propose or pass laws. Parliament will be able to check the president's authority by making and passing laws.

DS: What is your response to the allegations that Turkey will become a federation, if it transitions into the presidential system?

Federal and unitary structures should be evaluated according to whether the executive, legislative and judiciary are uniform. For example, in the U.S., every state has its own laws, while in the Ottoman Empire the legislation was uniform. Every law and amendment was made in Istanbul. This was also valid for the executive and judiciary. There is no history of federalism in Turkey. A unitary structure is a must for Turkey.

The presidential system is a form of government. It is possible to say that the imposition of the parliamentary system causes many obstructions to resolving many issues in Turkey. When transitioned into the presidential system, Turkey will have a better chance to resolve most of the issues. Yes, it definitely will not resolve each and every issue; it is just a possibility that will strengthen Turkey's hand in resolving many matters.

DS: What will happen if the presidential system cannot be achieved with the new constitution: a referendum or an election?