MHP to decide on constitutional change after AK Party's proposal 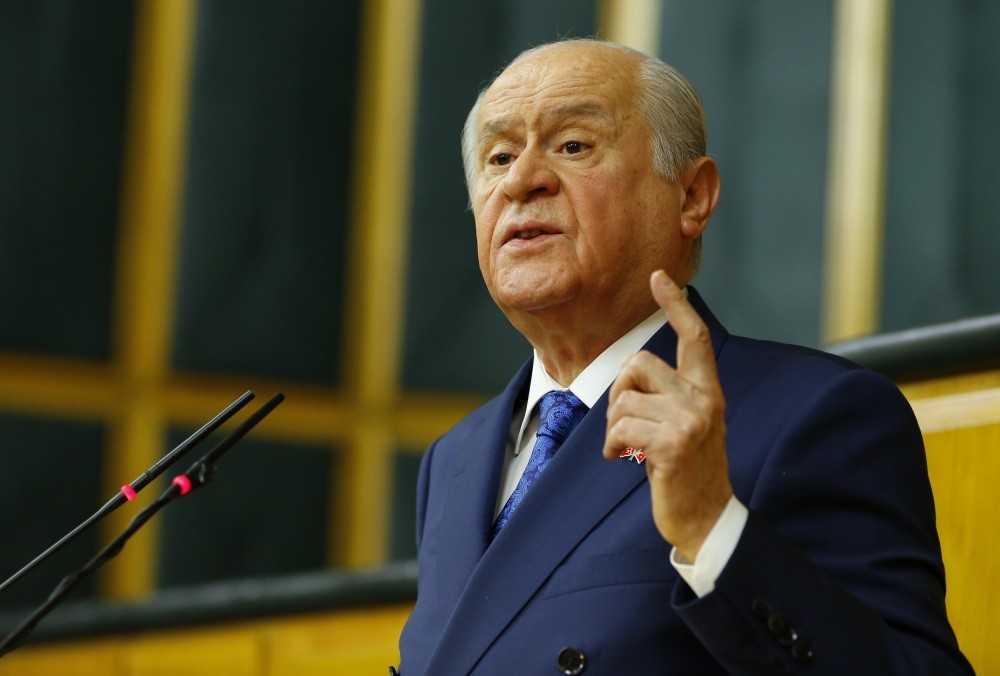 MHP leader Bahu00e7eli spoke in the partyu2019s weekly parliamentary group meeting.
by Daily Sabah Oct 26, 2016 12:00 am
Nationalist Movement Party (MHP) Chairman Devlet Bahçeli ended speculation about whether his party will support the ruling Justice and Development Party's (AK Party) new constitution proposal that includes changing to a presidential system, saying that his party will give its decision after seeing the AK Party's proposal. "The constitution proposal will be on Parliament's agenda soon. The MHP will examine the proposal's suitability along its party's principles and make a decision on it," Bahçeli said, speaking at his weekly party group meeting at Parliament on Tuesday. "No one should hesitate to ask for public approval if the AK Party's proposal (on the new constitution) would get approval from Parliament. The nation should have the last say," Bahçeli added.

"Mr. Bahçeli's remarks up to today are encouraging. We understand that they will make a positive contribution, within their conditions, to our proposal," he said.

Yıldırım also added that the AK Party is willing to meet Republican People's Party (CHP) Chairman Kemal Kılıçdaroğlu, as well, if it is needed.

Bahçeli slammed the main opposition Republican People's Party (CHP) for their statements that claim the MHP will support constitutional change without any conditions. "It's all in the air as yet, so how did these people come up with the idea that the MHP is in favor of a presidential system? Let's see the AK Party's proposal first," Bahçeli said.

Underlining that the MHP is in favor of a parliamentary system, Bahçeli also stressed that they will take into account the public's expectations: "Since we were established 47 years ago we have not taken any steps against our people's will. We know very well that only criticizing and making opposition doesn't meet the expectations of our nation. We are aware of Turkey's problems. Thus all of our proposals and suggestions are based on logical and moral values," Bahçeli said.

Commenting on the ongoing operation to liberate the Iraqi city Mosul from Daesh, MHP leader Bahçeli stressed that Turkey should not be out of the operation. "Discussion about Turkey's participation in the Mosul operation is the hot topic on the agenda. There are contradictory statements from the Iraqi central government in Baghdad even though the U.S. defense secretary stated that there is in-principle agreement about Turkey's participation," Bahçeli said. "Mosul's clearance from terrorists should have been completed very quickly and Turkey should be part of this operation," Bahçeli added, while emphasizing the Mosul operation will continue longer than initial plans.

"First, Mosul should be liberated from Daesh," Bahçeli said, highlighting the significance of the fight against the deadly terror group, Daesh.

Bahçeli said that Turkey cannot act according to the words of imperial forces. He also added that it was impossible for Turkey to ignore the chaos its neighboring countries face.

Speaking about the Bashiqa camp crisis, the opposition chairman stated that Turkish troops withdrawing from Bashiqa would be the same as withdrawing from Turkey's southeastern province of Hakkari, where PKK terrorists are mostly located.

"Turkey is at the top of Daesh's terror attack list," Bahçeli said adding that the U.S.'s dissatisfaction about Turkey's presence in Bashiqa is totally political for its various interests. he concluded.
RELATED TOPICS