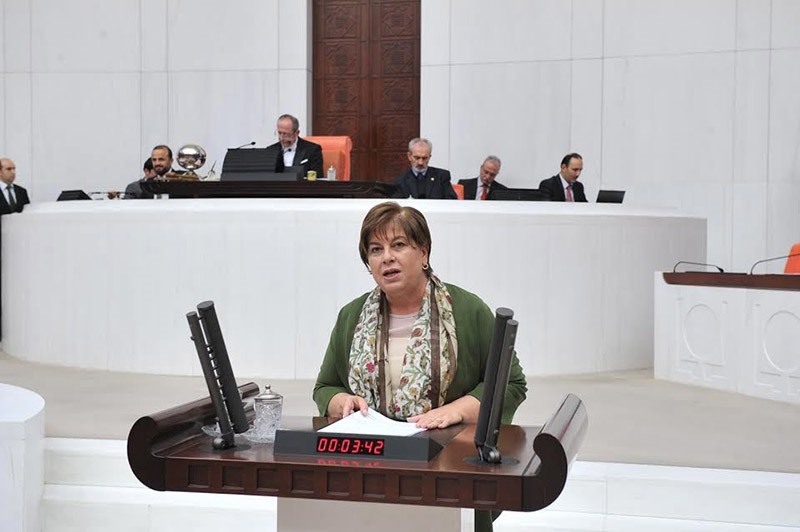 Main opposition Republican People's Party (CHP) Chairman Kemal Kılıçdaroğlu demanded Friday Deputy Elif Doğan Türkmen to resign from her post at the Parliament Presidency Council amid a scandal erupted as it was revealed that her communication costs exceeding TL 1.2 million ($310,005) for a single year were paid by the Parliament.

The astronomical bill, which is far higher than the second highest bill, sparked public outrage. Despite Kılıçdaroğlu showing support for Türkmen in a televised interview on Tuesday stating that lawmakers' privileged use of unlimited communication services free of charge is the reason to blame for the astronomical bill, however, several media outlets citing CHP sources reported that Kılıçdaroğlu was deeply annoyed by the issue ahead of the presidential system referendum that would likely to take place in April.

Türkmen has defended herself, arguing that she used parliamentary funding to reach out to voters, compatriots and the broader public, saying: "I don't think I should be held accountable for expensive costs incurred by Parliament for communication services. I was never informed of the cost. The real question is how parliamentary officials procured these services for such high prices," she said in a written statement. Türkmen insisted she is not guilty of anything, but public outrage against the lawmaker grew on social media, especially after it was revealed that her communication bill for January had already reached TL 700,000. Some social media users mocked the bill, saying she could send more than 6 million SMS messages and talk on her cellphone for more than 6 million minutes or download 25 terabytes of films online in one month. Others called on Türkmen to pay the bill herself.

Türkmen's bill in January 2017 has also created controversy as it was near TL 800,000 in a single month.

While Doğan's astronomical bill is at the forefront, the total communication costs of the members of the Parliament Presidency Council, who are not bound with caps in communication spending like the rest of lawmakers, exceed TL 10 million in 2016. In addition to Parliament Speaker Ismail Kahraman, the council is comprised of 23 members, 12 of which are from the ruling Justice and Development Party (AK Party), six from the CHP, two from the Peoples' Democratic Party (HDP) and two from the Nationalist Movement Party (MHP). Top five bills in 2016 reportedly belong CHP deputies in the Council.

Parliament will discuss the privileges for lawmakers next week following the revelation of the astronomical bill.