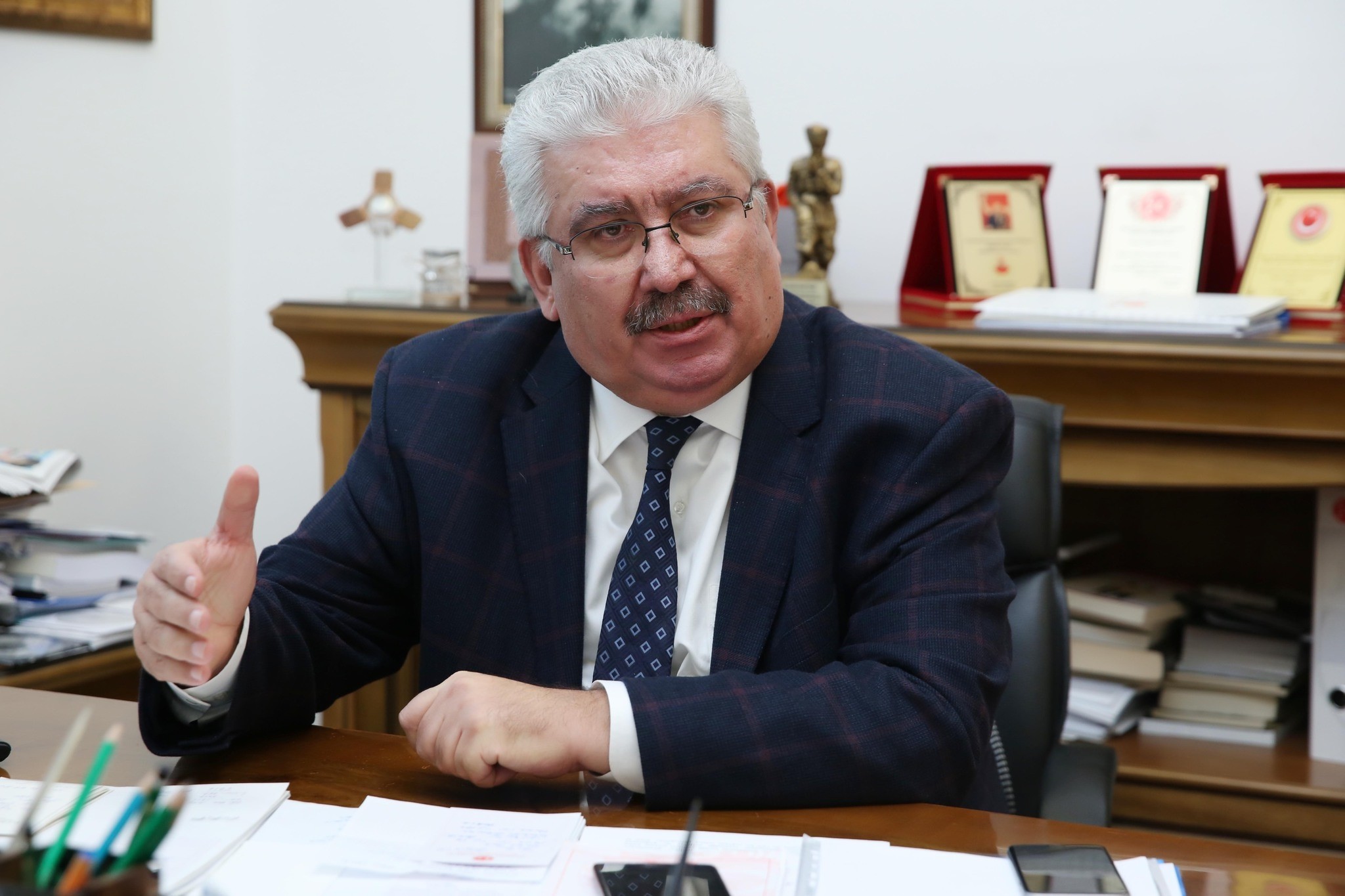 Opposition MHP's deputy chair said the new constitutional amendment package does not lay the foundation for one-man rule, on the contrary, it strengthens the harmony between the state and people with republican principles

The constitutional amendment to implement a presidential system as Turkey's new system of government passed Parliament with the support of the Justice and Development Party (AK Party) and the Nationalist Movement Party (MHP), and it is expected to be voted on in a referendum in April. Answering Daily Sabah's questions on why the MHP supported the constitutional amendment, MHP Deputy Chair Professor Edip Semih Yalçın underscored the July 15 coup attempt and the threats that Turkey faced afterwards as the most important factors. 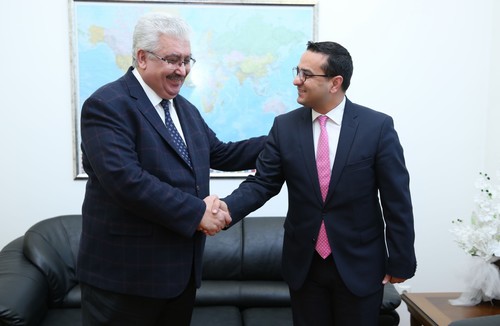 Indicating that the separation of powers in Turkey will be clarified and consolidated with the amendment, Yalçın said that they were actually reinforcing harmony between the state and the people with republican principles, instead of the alleged one-man rule.

Daily Sabah: The constitutional amendment foresees the end of the parliamentary system and the implementation of a presidential system. The MHP had been advocating parliamentary democracy in the recent past. What changed your minds?

Semih Yalçın: First of all, alleging that the parliamentary system is ending is both theoretically and practically not true; on the contrary, Parliament will continue to function. The difference is that the presidency will be strengthened with authority, responsibility and duties. In addition to this, the system of government was completely renewed by strengthening the post of presidency in terms of authority, responsibility and position.

The definition of this system in the said constitutional amendment is "presidential government system," which is accurate and well done. This is the truth. Therefore, talking about a presidential system is not very precise. Countless times we said we were principally in favor of the parliamentary system. Our chair, Devlet Bahçeli, made numerous statements on this issue; however, Turkey now is in a different state, especially after the treacherous FETÖ July 15 coup attempt. The parameters, components, tools and destination of politics have been changed.

Beside societal demands and expectations, internal and external issues that directly affect both the people and the state have also given politicians a duty to fulfill.

While Turkey is surrounded by enemies, it is not possible to continue with the existing system. We wouldn't be able to overcome challenges with an administrative system whose legal legitimacy is disputed. For this reason, our chair, Devlet Bahçeli, took a historic step and revitalized the spirit of national unity, taking the wind out of Turkey's enemies' sails. The spirit of Yenikapı is still vigorous. We believe that this spirit will break the chains that bind Turkey.

Instead of questioning why our party has agreed to support the said constitutional amendment, one should focus on Turkey's political and social realities, and especially interpret the signs of chaos, crises and coups that have been exacerbated since the July 15 coup attempt.

DS: How do you respond to the allegations that the new system will weaken the separation of powers or even render it irrelevant?

S.Y: We definitely do not agree with such allegations. On the contrary, we believe that the separation of powers will become consolidated, as ambiguous lines between independent powers become clearer, eliminating confusion and disorder. Parliament will continue to exercise its power to legislate, while the president becomes the executive. Judicial power is already exercised by Turkish courts. The crisis and chaos pact is using whatever it can to slander the constitutional amendment. However, it is definite that the separation of powers will be consolidated and made much clearer.

Is it true that the president will bypass Parliament and rule the country all by himself/herself with executive orders?

SY: It is a baseless allegation. Parliament has the sole authority to make laws. The change we have proposed to Article 87 of the Turkish Constitution is very clear. Parliament has the right to pass, change or abolish laws, discuss and approve budget proposals, decide whether to print money or declare war and ratify international agreements. Considering all of these, who can say that we are making Parliament completely irrelevant? There is not even a speckle of truth in these lies and slanders.

It's not being limited. The change in Article 98 only removes the right to interpellate the executive. Other mechanisms, which are parliamentary research, general debate, parliamentary investigation and written question submission, are maintained. Regarding the right for interpellation, there are rational, meaningful and admissible reasons for removing it.

Do you agree with the argument that interpellating ministers is unnecessary due to the system, as the president will be the "one-man government" who will receive the vote of confidence directly from the public and will appoint the ministers?

As I previously said, I believe there are reasonable causes for this; one of the answers to your question is actually hidden in your question. The new system of government does not need interpellation, not at all. It is not rational to use the previous system's supervision mechanisms in the new one in which the president appoints ministers.

In the new system, the president will be able to maintain his/her position as the chair of a party. As long as the electoral system does not change, the parliamentary group of the party will also be designated by the president. If the president's party has the majority of seats in Parliament, will the legislature be able to supervise the executive independently? What kinds of countermeasures are there to prevent the legislature and the executive from merging?

SY: This question is based on an assumption. We believe that pondering assumptions and possibilities will lead us to errors and erroneous evaluations. Talking about the risks of the legislature and the executive becoming merged before the referendum is not right. No one should worry; the constitutional amendment we support will deepen the separation of powers, while improving their harmony and coexistence.

Some members of the Supreme Council of Judges and Prosecutors (HSYK) and the Constitutional Court will be appointed by the president, while the rest are to be determined by Parliament. If the president and the majority of Parliament are from the same party, what kinds of countermeasures will prevent the executive from dominating the judiciary?

It's guaranteed by the will of the people, by the consciousness of national unity and by the virtues of democracy. We are not laying the foundations of a dictatorial regime or dictatorship; on the contrary, we are fighting to get Turkey back on its feet and reinforce harmony between the state and people with republican values. Therefore, it is possible to claim that Turkey will become safer, more peaceful and more stable, while there will be the rule of law. Beautiful days await us.

The law states that Parliament and the president can renew elections under the principle of reciprocity, which means that both of them have to go to elections. This prevents the system from deadlocking and makes up a part of the checks and balances mechanism.

Your question, on the other hand, is a hypothesis. Assuming a hypothetical situation in the future based on today means disregarding the opposition, along with the will of the people. We will see what will happen when the time comes.

Once again, it is only an assumption that a president will use his/her authority without any limits. It is possible to extend states of emergency and the validity of statutory decrees, if conditions require it. However, this doesn't mean that there will not be any limits to a president's authority. We currently are in a state of emergency, and when it's deemed necessary, both the state of emergency and statutory decrees can be extended. Let alone, our international liabilities concerning fundamental rights and freedoms remain intact.

Claiming that presidential elections can be affected by the distribution of seats in Parliament is really nothing but a baseless assumption. Every election has its own dynamics; so, elections in the new system of government will create their own dynamics. For instance, in presidential elections, people will vote for the person himself/herself, rather than parties, while they will vote according to the party in parliamentary elections. Even in the case of a run-off election, people will still vote on an individual candidate. In the first popular presidential elections, which were held in 2014, Recep Tayyip Erdoğan received approximately 52 percent of the votes and became president. Erdoğan received 21,000,143 votes. The distribution of votes in parliamentary elections is different. For instance, in the 2011 parliamentary elections, the AK Party received 21,400,000 votes, which amounted to 49.83 percent of the total votes. On the other hand, the Republican People's Party (CHP) received 25.98 percent, while the MHP had 13.1 percent of the total votes. President Erdoğan received fewer votes than the AK Party did; however, its percentage was higher. Therefore, the outcome was determined by the voters and the dynamics of the presidential elections, not by the parliamentary elections. If the amendment passes the referendum, the outcomes of the 2019 elections will once again be determined by the voters and the candidates, along with the dynamics of the new system of government.

Even though the president and the majority in Parliament are from different political parties, the system will continue to function. As the distinction between the legislature and the executive is clearer in the new system, each of the powers will continue to function within their jurisdictions. Originating from different political parties will no longer deadlock the system, as the system will create its own balances. I believe there will not be any compatibility issues.

While this is the case, I believe that Parliament directing or affecting run-off elections is a part of the reconciliation culture.

There are evaluations that the state in Turkey will eventually transform into a two-party system with the new system of government and parties like the MHP will become irrelevant in the mid-term. What is your take on this perspective?

Our system is different from the American one; it has its own characteristics. To have a two party system, there should be a two-round system in parliamentary elections, two houses in Parliament. Moreover, it should have an electoral college that is elected by the people and then elects the president. We do not have any of these. For instance, in Pennsylvania the Electoral College consists of 20 members. First, the American people elect these members and then the members vote for the president. The important part is that they have a first-past-the-post system; therefore, whichever party has the highest votes, gets all the members. It's the same in every state in the U.S. If we had this, it would mean having single-member district, and then the two-party system would become a necessity. However, we do not have this kind of system.

Our Parliament is different and will remain different compared to the U.S. example. We have single-round elections, and both members of Parliament and the president are directly elected by the people. Therefore, the two-party system is not a possibility for Turkey. Anyone alleging that it will become a two-party system clearly did not inspect the amendment and its 18 articles.

So, the MHP will remain in politics after the elections in 2019?

Definitely. The MHP will continue to be active. As I've said, we do not have the same system as the U.S. We will maintain the existing Parliament and the election system with the addition of a strengthened presidential government system. Both Parliament and the president will be elected by the people, thus the national will.

There are allegations that there will be ministers of MHP origin in 2019. How do you evaluate these allegations?

It is hard to predict what will happen in 2019. On the other hand, it is a sensitive question that should be evaluated when the time comes. We should all wait until 2019 and see what happens.