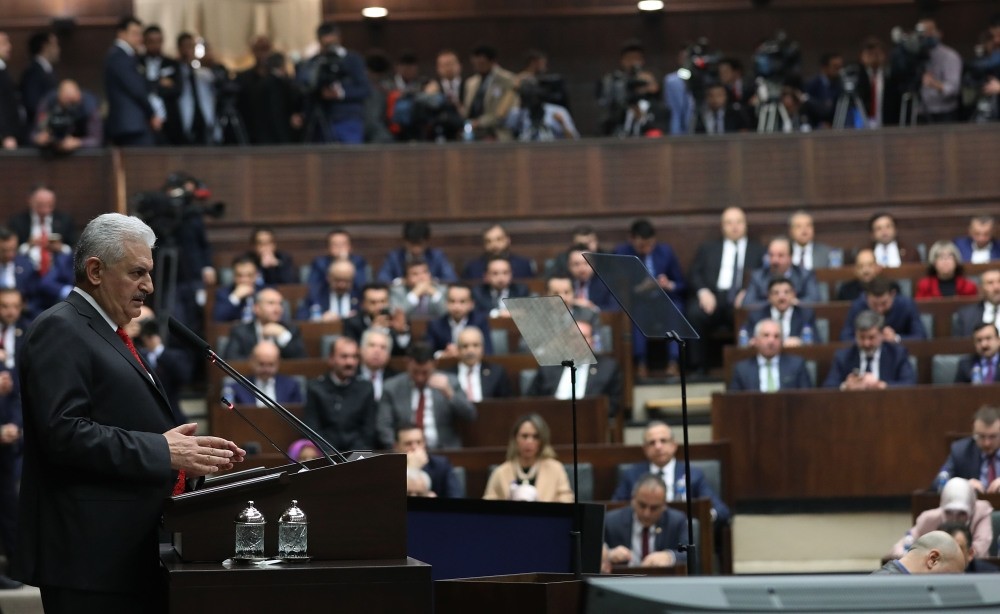 Speaking at the Justice and Development Party's (AK Party) weekly parliamentary group meeting in Ankara, Yıldırım also said, "They are afraid of going to the nation, whose decision is the most accurate decision."

Since the start of the constitutional amendment talks, the main opposition CHP and pro-PKK Peoples' Democratic Party (HDP) have shared a similar stance against the amendment, a viewpoint also shared by terror groups like the PKK and FETÖ. As the CHP and pro-PKK HDP are expected to vote "No" in the upcoming referendum, Prime Minister Yıldırım called on main opposition CHP and advised them against siding with terror groups and "getting in the same boat with the HDP."

He underlined that the constitutional amendment has become a necessity after "the main opposition sided with tutelage powers to prevent the parliament from electing the country's president." The prime minister slammed CHP for "speaking on behalf of terror groups" and said, "You will never win the hearts of people by cooperating with separatist terror groups like FETÖ and the PKK." Yıldırım went on to say that the opposition CHP "is afraid of the people's decision," stressing that "the people's decision is the most accurate decision."

He also touched on the CHP's repeated allegations of regime change via the constitutional amendment and said, "The discussions on regime ended during the establishment of the republic in 1923. But they claimed a regime change when we addressed the headscarf ban issue, saying lifting of the ban was a matter of regime change. Regardless, we have resolved the issue and the regime still stands strong." Yıldırım went on: "It is not an issue of regime [for CHP], it's an issue of mentality. Those with the mentality of an old, anti-democratic Turkey cause the greatest damage to the regime." The prime minister also criticized CHP over its lack of knowledge on the constitutional amendment.

Meanwhile, he praised the opposition Nationalist Movement Party's (MHP) stance throughout the constitutional amendment process. "They have acted with an understanding of prioritizing the country and people foremost. We remember the MHP's strong position toward the country's endurance in the past, during times of crisis, and they have displayed a similar stance this time, as well," he added.

Yıldırım also shed light on the party's referendum campaign strategy, as he urged all AK Party members and organizations to visit every home and reach out to everyone. "We are heading toward a referendum not to protect the 'tutelage' constitution but rather to establish a people's constitution," he stated. The prime minister reiterated that the AK Party believes "the constitutional amendment will result in great outcomes for Turkey in the future."
RELATED TOPICS