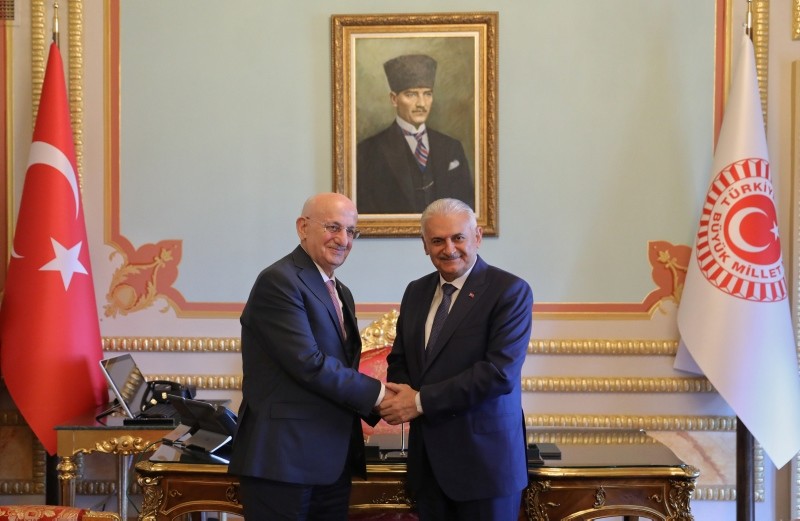 Prime Minister Binali Yıldırım, whose post will abolished as Turkey will switch to executive presidency system as of Monday, was nominated Saturday by his Justice and Development Party (AK Party) for the parliament speaker post.

In first remarks, Yıldırım said: "Hopefully it will be good to our state and nation. Some other candidates may emerge too. Whatever our parliament says, so be it."

According to the Turkish state protocol, the parliament speaker is the second-highest ranking government official. Current Parliament Speaker Ismail Kahraman, who served for two terms, did not seek another term due to his old age and health problems.

Deputies have convened in the Parliament of Saturday for the oath-taking ceremony and the session was chaired by Uşak deputy Durmuş Yılmaz from the Good Party (IYI Party - IP) as the oldest deputy.

In first two rounds, a two-thirds majority is sought for parliament speaker election in the 600-seat parliament. Yıldırım is the joint candidate of the AK Party and the Nationalist Movement Party (MHP), which formed the People's Alliance for June 24 presidential and parliamentary elections and have 344 seats combined. Yıldırım will likely be elected in the third round as a simple majority is required.

Before the announcement, Yıldırım came together with Kahraman and MHP Chairman Devlet Bahçeli for brief meetings.

Yıldırım, a longtime ally of Erdoğan, has also been rumored to be nominated for the Mayor of Istanbul in local elections scheduled for March 2019.

Other parties in the parliament are yet to announce their candidates.