Gaziantep plays at the Toy museum 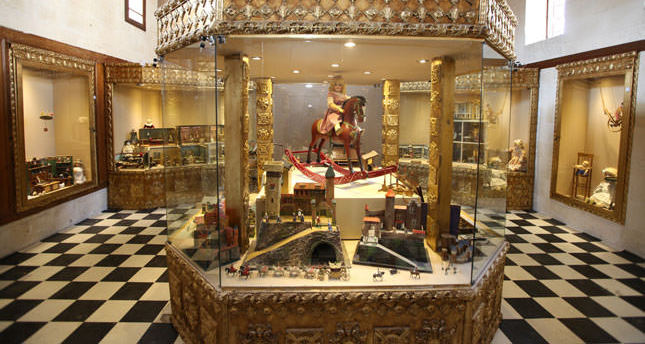 The Gaziantep Toy Museum, opened last year in the historic Antep house after its restoration, attracts the attention of adults as well as children with its toy collection consisting of about 600 works

The Gazİantep Toy Museum, which showcases nearly 600 toys produced between 1700 and 1990, arouses interest among children while taking adults on a journey through time. The Gaziantep Metropolitan Municipality opened the museum last year in a historic triple-storey building in Gaziantep's Bey neighborhood after working on the project with poet and collector Sunay Akın for two years.

The museum, which builds a bridge between the past and present, aims at preserving and cherishing children's culture and leaving it to future generations. Visiting the museum contributes to children's physical and mental development as they relate the objects to themselves, while adults have the pleasure of showing their children the toys that they played when they were little.

The museum's sections, which include an exhibit on Turkish toys, a cinema hall, a kitchen and an exhibit on social life, are displayed in the rooms on the first floor and the history of toys and first edition toys are exhibited in rooms located on the second floor, while the penthouse hosts toys from recent years.

The second floor, which displays the oldest toys, features the first example of a puzzle, Lehmann toys and dolls with real hair. Moreover, dolls of Pinocchio, Snow White, Mickey Mouse, the Ghostbusters, the Flintstones and important figures of cinema such as Charlie Chaplin are showcased at the museum.

The museum also draws attention with its 3D display windows recounting the German front during World War II, the social lives and conflicts of American Indians with white settlers, the Apollo space craft, E.T. and the Star Trek T.V series.

European industrial and agricultural tools, which thrived during the Industrial Revolution, firefighting equipment and amusement park toys are also among the other pieces exhibited at the museum.

Discovered by chance during the restoration works of the building, a double-storey cave was also made part of the museum and opened to visitors on National Sovereignty and Children's Day the previous year. The 400 square meter cave, called the World Children's Gallery, features models of children from 23 countries dressed up in their native attire along with these county's hallmark architectures. The cave was used as a cellar and has tunnels that were used during the Antep Defense.

Sevda Mutlu, who works as a guide at the museum, told an Anadolu Agency correspondent that the museum attracts children as well as parents. She said parents are far more interested in the toys on display than their children. "Furthermore, many visitors came here without their children and ask me to guide them about the toys," Mutlu said, adding that adults find traces of history and their memories through the toys. She pointed out that children are now more interested in tablets and computers. "In fact, toys open up children's horizons. For instance, the space toys that are placed in the display window belong to the 1950s. Children wonder about the space as they play with them," said Mutlu.