Bosporus Bridge to be lit in purple on Prematurity Day 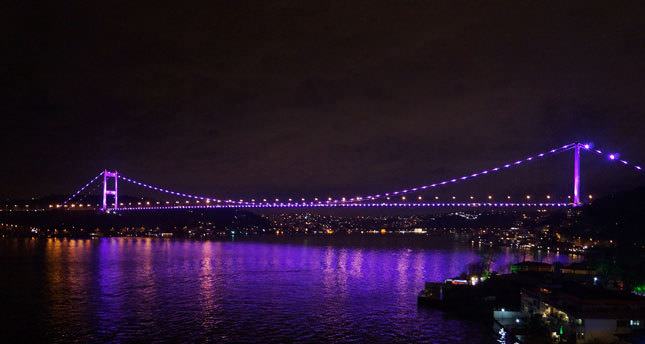 by Daily Sabah Nov 15, 2014 12:00 am
The Bosporus Bridge will be lit up in purple on Nov. 17 to mark World Prematurity Day and raise awareness on premature birth. Other highlighted points will also be in the same color around the world.

Since 2012, Turkey's premature baby coalition "PremaTürk" has taken an active role in drawing attention to premature births in Turkey while contributing to the policies that reduce them.

The lighting design on the Bosporus Bridge was initiated by the coalition. One of its members, Professor Fahri Ovalı of Zeynep Kamil Maternity and Children Training and Research Hospital Newborn Unit said that 15 million premature babies – 11 percent of all births – are born each year across the globe. He went on to say 1.3 million babies are born per year in Turkey and 12 percent of them are premature births. "It means that each year 15,000 premature babies are born in Turkey. The problems observed in premature babies around the country and world are increasingly becoming an important issue," Ovalı said.

This will be the third time that PremaTürk initiated a lighting design on the Bosporus Bridge to raise awareness for premature birth on World Prematurity Day.