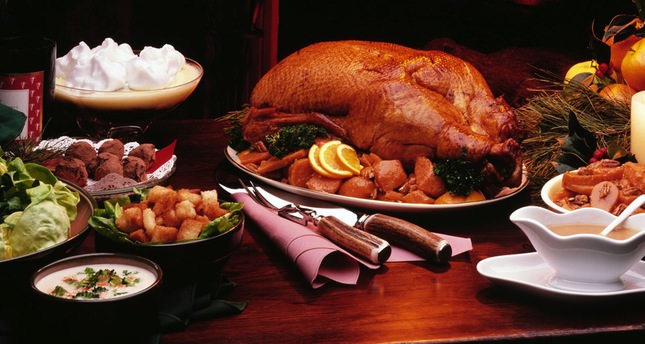 This Thursday, Nov. 27, is the all-American holiday of Thanksgiving. For those who celebrate it, it is a time of feasting, feeling grateful and celebrating with loved ones

Thanksgiving is an American holiday that falls on the fourth Thursday in November of every year and is, historically, a day of giving thanks for the bounty of the harvest. Traditionally, this holiday is all about the Thanksgiving feast celebrated with family and friends who sit down to a table of roast turkey and a number of classic dishes as everyone takes turns expressing what they are grateful for. The meal shared is an all-American classic and includes roasted turkey with stuffing, cranberry sauce, sweet potatoes, green bean casserole, mashed potatoes with gravy and for dessert, pumpkin or pecan pie.

The challenge to celebrating this holiday in Turkey is, of course, finding the unique items needed to create the traditional Thanksgiving meal. You may think it would be easy to find a turkey in Turkey, but sadly you would be mistaken – even though it is ironic since this bird native to the Americas was in a sense named after this country that we call home.

Have you ever wondered why the bird was given the same name as the country and why in Turkey the word for turkey is "hindi," which is the same word for India? Well, the British used to import an exotic bird, similar to the guinea fowl, from Madagascar that they named after the country in which the merchants that sold it hailed from, which happened to be Turkey.

When the Spaniards arrived in North America, they "discovered" the bird that is the turkey we know of today and also began exporting the birds to Europe through the Mediterranean Sea. Once again, Turkish merchants handled the cargo, as much of the region it passed through was Ottoman territory at the time. As the unique meat resembled the turkey the British had tried before, they simply appropriated the name to the bird from America and continued to refer to the bird as turkey when they established the first colonies in the Americas.

Coincidently, in Turkey, turkey is called "hindi" in reference to where the Turks thought this delicacy hailed from – India. It was a result of the longstanding myth at that time that Western explorers had found a route to the orient. This misperception began with the French, who referred to turkey as "dinde," derived from the word d'Inde, which means the country India, leading to Turkey's adoption of the term. The Hebrew term for turkey also fell into the same trap, as the Hebrew term for Turkey is tarnagol hodu, it literally means the "chicken of India."

Let's talk turkey in Turkey! Yes, Turks do eat turkey, just not that often and certainly not roasted whole unless it is New Year's Eve – the one occasion in which they do cook an entire turkey. This means that with the exception of sliced turkey and turkey breast, it is slightly challenging to find a whole turkey in November. However, finding foreign foods is luckily becoming more possible and this Thanksgiving you can not only order a turkey online, but you may even be able to find a whole turkey at local supermarket chains such as Migros, Carrefour and Bim.

To order online, Bolca offers turkey in all shapes and sizes, including whole, half or in parts such as drumstick or wings. Banvit also sells whole turkeys they will deliver to your home, as will Macrocenter, which has entire turkeys in both their stores and on their website.

If you want to forego the full production of preparing your Thanksgiving bird, then there are also a number of options for purchasing a pre-cooked turkey. On Monday, the Istanbul Culinary Institute will be announcing their offering of specially prepared pre-cooked turkeys for this Thanksgiving, you can order on their website. Santral Şarküteri in Bebek will also roast a turkey served stuffed with rice, which you can order up to a day before, as will Hünkar restaurant in Nişantaşı if you give them two-days' notice.

Another festive option is to have a smoked ham, which you can get from Lazari Kozmaoğlu, Istanbul's last pork butcher, located in Dolapdere. Just let them know a few days ahead of time with a phone call. Porkynet.com will also send out a pork rump or joint if you want to go full out for your Thanksgiving feast.

The other challenges, all of which are surmountable, are the lack of canned pumpkin and fresh or frozen cranberries. Both local markets will have fresh pumpkin and possibly dried cranberries and you may even be able to find them at grocery stores. Metro now sells yams and Macrocenter sells sweet potatoes, but pecans are harder to come by. To ramp up the "Americanness" of your meal, there are a number of famous delicatessens in Istanbul that sell American products such as marshmallows and maple syrup, namely Şütte, Santral Şarküteri, Merkez Şarküteri, Doğa Şarküteri and Milka, the latter of which even has mac-and-cheese. For pumpkin pie, Zencefil offers a dessert that is a similar version to the classic, whereas for the perfect Turkish twist on Thanksgiving, try kabak tatlısı, a Turkish pumpkin sweet.

To usher in the holiday with fellow expats there are a number of events held around town for foreigners to celebrate Thanksgiving. The most popular feast in town among expats is held each year at the Bosporus Terrace Restaurant at the Istanbul Hilton. A special Thanksgiving buffet is served with a stunning view of the Bosporus.

Conrad Istanbul will also be hosting a very special buffet dinner for Thanksgiving this Thursday at their newly renovated restaurant with views of the whole peninsula.

Pop-Up Restaurant Istanbul is hosting Thanksgiving (The Great American Feast) in Cihangir from 8:00 p.m. to 2:00 a.m. and on Tuesday, November 25, join fellow foreigners and Turks for a pre-Thanksgiving Spoken Word Night that starts at 8:30 at Arsen Lupen in Beyoğlu. In Ankara on November 27 at 7:00 p.m., the Turkish-American Association in Ankara will host their traditional Thanksgiving dinner as well.