The ruins of the Gaza Strip enlivened with brushstrokes 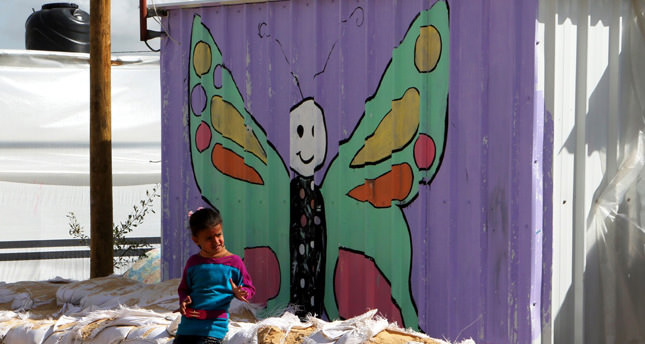 Marked by the terrifying destruction of last summer’s Israeli assault, Gazans are sprucing up their fabricated houses and ruined buildings with paint in order to remove the traces of war

Going through hard times due to Israeli assault, Gazans paint the exterior walls of their prefabricated houses and the stones on the Gaza harbor to remove the dark side of the war and color their mourning life as far as possible.

As a part of the campaign conducted by a social recovery institution, those who were forced to leave their home make creative ornamentations on their temporary houses, appearing in different colors. The campaign is greatly supported by local painters and craftsmen aside from residents. One of the campaign members, painter Hazım Zemmar said the project allows them to show the sufferings of Gazans living in Khuuza, a region on the Gaza-Israel border where reduced nothing but ash and rubble. "Those visiting our region will see the current situation around here," Zemmar said, adding they want to inform the world about their life conditions in prefabricated houses. The region desperately needs the basic materials to sustain life.

At the beginning, the members had some hesitations on whether the project would be accepted by local residents. "We did not encounter any objections. Instead, people are helping us. We paint the symbols of freedom and human dignity on the walls of our houses," he added. Along with different patterns, painters make color the walls with butterflies to indicate hope and freedom for children, the vulnerable victims of the war. Ferah Kaddih, a nine year old child living in one of the prefabricated houses, said they want to live in a cozy house, where they can feel warm.

Campaign director Selma Ebu Dahi said the campaign has been created to leave the dark days behind. "Many Gazans are living in prefabricated houses. Every day, the iron surface of the houses reminds them darkness. This is because we are coloring them," she said. Dahi went on to say that their project helps them to recover and make them feel relax even if to a certain extent.

Similarly, young Gazans colored the stones on the Gaza Harbor, where has been under the blockade of Israeli since 2007. The stones now appear in rainbow colors. The colorful stones give the message that Palestinians want to live in peace and away from death. The young people also wrote "we are behind our country" on stones.

During the Israeli onslaught, the Palestinian death toll hit 2,149 with 11,000 injured while partially or completely destroying thousands of residential structures across the territory. The 51-day war, which commenced on July 7 and ended on August 26, left 9,000 homes in Gaza in total ruin.