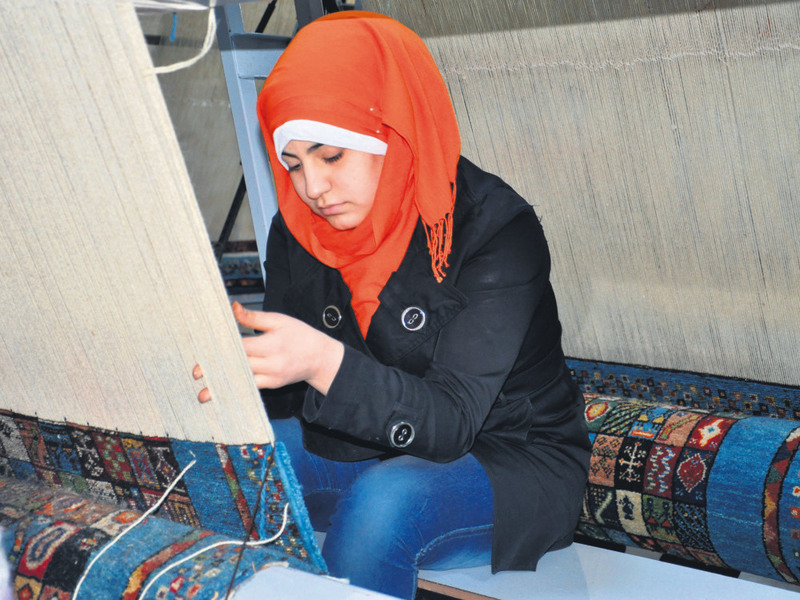 by Anadolu Agency
Mar 09, 2015 12:00 am
Supervised by Turkish teachers, Syrian women are learning how to weave carpets using traditional methods particular to Anatolia at a carpet weaving workshop at the Elbeyli Accommodation Center in Kilis, which attracts attention both in Turkey and from abroad. Nearly 24,000 Syrian refugees who live in the camp try to hold on to life with the opportunities provided for them. The camp, which offers education to the Syrian children, also organizes professional courses for adults. Approximately 1,500 women are trained in self-improvement and traditional handicrafts at the women's social living center established by the camp's administration. At the carpet weaving workshop, which was established at the camp, 100 women, either war-victims, orphaned girls or widowed women, are being taught traditional carpet motifs and weaving methods. The carpets, which are sold for TL 1,000 ($383.36) per square meter, are exported to various countries, especially Japan and China.Deputy Governor Vedat Yılmaz, who is responsible for the camp, told an Anadolu Agency correspondent that they should help the Syrians who are living in tents and containers to be a part of the country's artistic production. Stating that 1,500 people have attended self-improvement, handicraft, professional skills and hobby courses at the camps so far, Yılmaz also announced that they have opened a carpet weaving course. He said that they choose women, especially those who have lost their husbands and loved ones, and educate them. "Women who have lost their husbands might face difficulties working outside. We provide them with the possibility to work and earn money inside the camp where it is secure. A woman who weaves a carpet can earn TL 600 each month. The carpets that the women weave and transfer their sorrow and happiness onto are even sent to Japan by an export company," the Deputy Governor said. Tuba Ünsal, who is responsible for the courses that are organized at the camp, explained that they produce approximately 20 carpets on 32 carpet looms. She said that the revenue of the carpets is given to the women who weave them. One of the trainees, Fatma Neccar, who lost all of her male family members to the Syrian civil war, said that she took shelter in Turkey nine months ago together with her children and sisters. Stressing that she has been weaving carpets at the camp for the last six months, Neccar said, "I learn how to weave a carpet and earn money. The Turkish government supports us in every way, but there is nothing like one's homeland. If the war comes to an end, I will continue my profession in Syria."
Last Update: Mar 09, 2015 10:10 pm