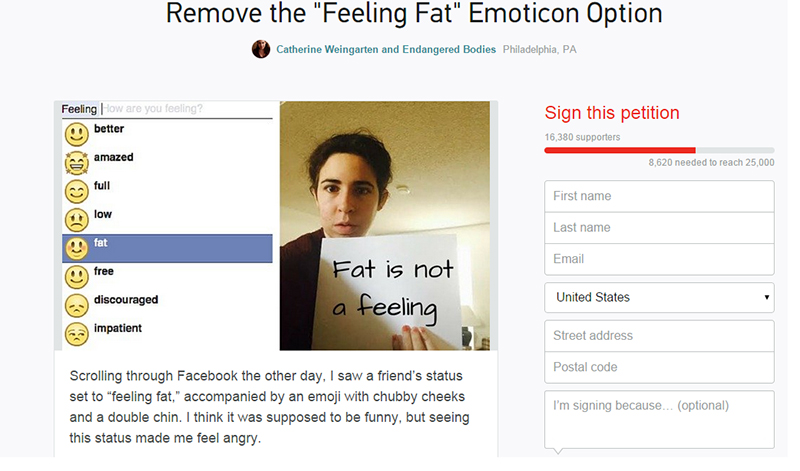 by Daily Sabah Mar 10, 2015 12:00 am
A group of activists has initiated an online petition urging Facebook to remove its 'feeling fat' emoticon which has received more than 16,000 signatures.

The double-chinned emoji is one of about 50 feelings icons which users can add to their updates. The "Fat is not a feeling" campaign was initiated last week by Catherine Weingarten and Endangered Bodies, a group that "aims to save future generations from misery that turns people against their own bodies."

Weingarten wrote on the petition's page, "Scrolling through Facebook the other day, I saw a friend's status set to 'feeling fat', accompanied by an emoji with chubby cheeks and a double thin," and added that she did not find it amusing.

"When Facebook users set their status to 'feeling fat,' they are making fun of people who consider themselves to be overweight, which can include many people with eating disorders," Weingarten told ABC News.

Claire Mysko, the director of programs for the National Eating Disorders Association, said while social media doesn't cause eating disorders, negative body talk in comments, a status or a share can amplify thoughts and behaviors that can lead to one. NEDA advises Facebook and other social networks on policies that might affect the body image of users.