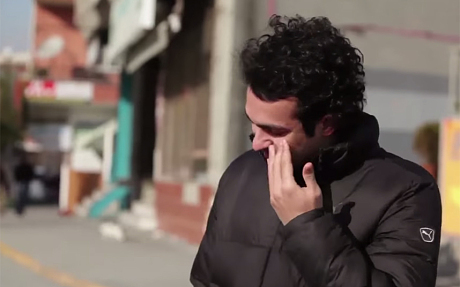 The video begins with Muharrem leaving home with his sister as they start to encounter people who are speaking to them in sign language.

Muharrem gets confused after several people, including a shopkeeper in a food store, a stranger passing by and a taxi driver communicates with them using sign language.

In the end of the video, Muharrem and his sister meet with neighbors waiting to greet him. Muharrem bursts into tears, touched that others would consider how shut off the world must be to him everyday.

The move was devised by Samsung's Turkey branch in order to promote their video conferencing service for the hearing-impaired with a message: 'A world without barriers is our dream'.